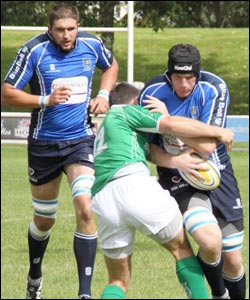 As last season the first weekend for Macclesfield was a successful one with a convincing 31-12 victory for the Blues over Wharfedale at Priory Park before a sadly small crowd of just over two hundred who watched the fare on offer and at this level of Rugb. It is quite disappointing to see around National One – the third tier in English Rugby – that the gates last Saturday were quite paltry despite some tasty encounters on offer.

Biggest crowd was at Fylde for the visit of Jersey and after all the pre match hype I was amazed that just 870 went along to watch the game – I was anticipating, and so were many more, something in the region of between 1,500 & 2,000 if you believed all the build up to the game.  However it was a Bank Holiday and an earlier than normal start to the season so we shall just have to advertise our game a bit better to see if, at Priory Park at least, we can attract more to watch the quality rugby football that is on offer.

Scrum Half Charlie Mulchrone was the three try ‘MOM’ in the Wharfedale game and ever accurate Ross Winney was on hand to convert all four Blues tries and add a penalty so, at this early stage, all the player losses from last season have not yet been felt as the new squad gains experience at this high level.

The Lions, representing the club in the Cheshire Cup, I understand went down 31-21 at Chester with former Blues Ben Latham & Liam Lawton in the home side but they will have opportunity of early revenge when Chester visit Priory Park on 17 September in a BMW Premier League encounter and as I have already indicated it will be interesting to see how the Lions Squad copes this time round after non stop success over the past couple of campaigns.  If you cannot travel to watch the 1st XV then there is always a game at Priory Park to watch and for the Lions et al it costs nowt.

England finished their World Cup preparations with a good victory in Dublin last Saturday and now await their first game on Saturday 10 September against Argentina in Dunedin, kick off 9.30.am. so it is one to watch before we entertain Sedgley Park who had an excellent 39-24 victory at Cambridge to open their season on Saturday.

England’s following games in Pool 2 are as follows:

Saturday 1 October v. Scotland in Aukland at 0930 which could be a pivotal game in the pool.

Make notes in your diary now and then follow up with a visit to Priory Park in the afternoon!!

Around National One last Saturday there were some interesting early season games with Barking just beating Blaydon (28-26) Birmingham & Solihull, relegated last season being heavily beaten by promoted Ealing 35-3, Coventry seeing off Cinderford 21-15, Fylde just outscoring Jersey in the match of the round at the Woodlands by 29-27, Rosslyn Park beating Blackheath 26-20 in the London ‘Derby’. And finally Tynedale beating this weekend’s opposition Stourbridge at Tynedale Park by 39-24.

However this is just week one of thirty until next April when the season ends so no predictions yet!!

Games this weekend as the season commences in full for all club sides as follows:

That’s it for now, off to Buxton Opera House for a bit of culture,