Macclesfield got their new National League One campaign off to the perfect start this weekend with a 31-12 victory over Wharfedale at Priory Park. 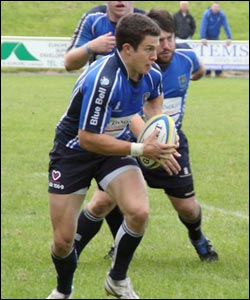 The Blues ran in four tries and secured an impressive bonus victory against an extremely competitive Wharfedale side.

First team coach Andy Northey said, “It was great way to start the season, and especially to secure five points. We played well against a tough Wharfedale side and we’ll build on that going into next week.”

Charlie Mulchrone gave the home side an early lead after just eight minutes when the visitors were put under heavy pressure from the Blues forwards allowing the scrum half to touch down, fly half Ross Winney converted to give Macclesfield an 7-0 lead.

Wharfedale were given the opportunity to get themselves back into the game almost immediately when the home side conceded a penalty but talented kicker Tom Davidson missed from close range and the Blues lead stayed intact.

Though ‘Dale didn’t have to wait much longer for their first points of the day, flanker Dan Solomi broke through the Macc defence on 20 minutes and carried the ball over the line. Davidson once again missed his kick and the lead was now just two points.

It what was now an end to end game with Macclesfield again going on the attack and on the half an hour mark Mulchrone scored his second try of the game, yet again great credit must go to the forward pack. Winney stepped up to convert and the half time score was 14-5.

The second half began at a frantic pace and the home team seemed to pick up where they left off scoring almost immediately after the restart, Richard Wigham capitalised on heavy pressure and carried the ball over the line. Fly half Winney converted the try and soon after added a penalty and the Blues looked good at 24-5.

Wharfedale’s task was made even greater when they were reduced to 14 men, Joel Gill was yellow carded for interference and ordered off the field by the referee.

Though under intense pressure and a man down the visitors rallied and scored their second try of the game. Andrew Hodgson broke free in midfield and touched down on 64 minutes, Simon Horsefall converted to take the score to 24-12.

The comeback was brief and Macclesfield ended all hope of a Wharfedale victory when Mulchorne burst through to complete his hat-trick and a bonus point for the Blues. It was arguably the try of the game and the talented scrum half showed great intelligence to score. Winney converted and completed an impressive start to the Blues new National one season.