It is with great sadness that Macclesfield RUFC announces the passing of long standing Club member Malcolm Bennett. Malcolm passed away in the hospice last Saturday after a short illness at the age of 77. 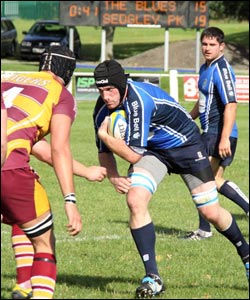 For more years than I care to remember Malcolm had done many different things for the club ranging from helping with the first team on match days, doing the match reports for the press and when not in an official capacity, travelling away to support the team whatever the distance.

Added to that was his willingness to help out on the grounds during the week and ensure the annual painting both inside and out was ready for the start of the new season. Much of the work on the posts and rails around Priory Park and indeed within the clubhouse was by his hand.

Always, on match days anyway, dressed like a ‘Dandy’ with his loud jacket and braces expressing his personality Malcolm always enjoyed his pre-match lunches  and was never slow to give an opinion.

I am not sure if he ever played the game but Macclesfield Rugby Club was a big part of his life and, clearly, our heartfelt sympathies go out to his family.

His funeral took place yesterday (Tuesday 13th) followed by a celebration of his life in the clubhouse at Priory Park.

In a fitting tribute to Malcolm’s memory there was a minutes silence held ahead of the Blues game against Sedgely Park this weekend. The team put in a performance that both Malcolm and all associated with the club can be very proud of.

The lads ran in five tries and secured yet another victory, that’s now three in a row and a maximum fifteen point have been taken and it puts the Blues joint top of the league alongside newcomers Fylde.

It’s been an exciting start to the season and the new faces in the team now seem to have settled in and the lads are going into every game with confidence and belief that they can beat whoever they come up against.

Elsewhere in National One Birmingham and Solihull beat Cinderford 29-17; fellow newcomers Jersey claimed an impressive 27-23 win against Blackheath. In another close encounter Cambridge edged out Barking 36-31, in yet another local derby this weekend Coventry beat Stourbridge 22-17. Fylde hammered Wharfedale 39-12 to join Macc at the top of the league.

Ealing continued the trend of wins for promoted sides beating Rosslyn Park 33-17 and the results were completed with Tynedale securing the bragging rights in the North East beating Blaydon 34-25.

In other results from around the club, the Lions suffered a 38-14 defeat away at Sedgley Park, the third XV secured a nail biting 22-21 win against Wirral seconds and the fourth team romped to a 66-29 victory against local boys Stockport fifths.

It was a fantastic weekend for all rugby fans not just at Priory Park but also with the start of the 2011 Rugby World Cup in New Zealand. I think we’ll all agree that it was a below par performance from England but a win is a win and I look forward to see how they fare in their next match against Georgia this coming Sunday. The host got their campaign off to an explosive start with an ominous 41-10 win against Tonga so the competition is fierce and it should be an outstanding tournament.

A quick reminder to all those Blues fans who are interested in attending the first pre-match dinner ahead of the Barking game on the 24th September, tickets are selling fast so if you wish to attend please contact the club on 01625 827899 for further information.

Enjoy your rugby – I do.