Back to winning ways for the Blues at Priory Park in a game that was delayed due to an accident on the M6 causing the barking coach to arrive late and, in conjunction with Geoff Wappett, it was agreed to begin fifteen minutes after the scheduled 3.pm. kick off. From the start it was Macclesfield who took the game to their visitors scoring six tries to two in an overall good display to keep the home side in the top three of the SSE National One table. 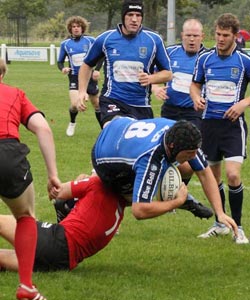 Fylde continued their 100% ways with a 43-10 victory over Lancashire rivals Sedgley Park and the only other unbeaten side – Ealing Trailfinders – beat Cinderford 21-18 in a close game but again only scored a couple of tries and therefore did not gain a bonus point.

Macclesfield sit in third spot on 21 points just one behind Ealing and four behind Fylde but even at this early stage of the campaign we now have a six point gap between ourselves and fourth place Cambridge who we visit on Saturday – see preview – after their excellent 23-15 win at Tynedale Park where few sides go away from with the spoils so it makes for a good afternoon and potentially Match of the Day at the Volac Park come 3.pm. Saturday.

Elsewhere in SSE National One there were victories for Stourbridge (19-16 at Birmingham), Blackheath who beat Wharfedale 27-24, Jersey who won at Rosslyn Park 24-9 and unusually at Coventry there was a high scoring 27-27 draw with visiting Blaydon taking the additional point for scoring four tries.

The other Priory Park sides had a mixed afternoon with the Lions taking pride of place with a 48-20 victory at Vale of Lune up in Lancaster whilst the Thirds beat Trafford MV at Priory Park by 21-16.

The Fourths lost out at Heaton Moor against their threes by 29-27 and the Vets – yet to play Vets opposition thanks to early season cry offs lost out to a youthful Sale Thirds by 48-17 but I understand that this score line does not reflect the play as Sale scored several breakaway tries.

As the season comes to the end of the first month time perhaps to send out the message to anyone in the greater Macclesfield area who might read this and who would like to play their sport at a progressive club with excellent facilities to come along and try us out. Contact club office on 01625.827899 to give your details and then come down training or on Saturday to watch (with kit – just in case!!)

The first pre match dinner took place before the Barking game on Saturday when fifty odd enjoyed the fare on offer and the next one is scheduled for Saturday 15 October when Rosslyn Park pay us a visit.

Menu is Red Pepper & Tomato Soup, Roast Loin of Cheshire Pork with the trimmings, Assorted Cheese & Biscuits and coffee/mints.  Cost will be £25 for members, £30 for non members and £15 for season ticket holders which will, of course, also admit to match, car park and programme. Contact club office for your place or return the form that has been circulated to members.

After finishing my Cricket season the previous week Clubman had an interesting re-introduction to National League Rugby on Saturday when I was asked for a ‘one off’ to take on the Fourth Official role as our normal official, Albert, was away enjoying the delights of the Italian Lakes.  I can’t say overall that I enjoyed the experience but I suppose it is another string to the bow but it does make me think of all those involved at Priory Park who take on various roles within the club on match days or every day over and above the paid staff of the club.  What is blindingly obvious is that Macclesfield Rugby Club needs volunteers in many roles to keep the club on an even keel away from the 1st XV on the park and it is also obvious that there are many gaps to fill so if you are interested please make yourself known to those involved at the club.  When only a handful (or less) travelled to Blaydon to support the side and show the face of the club in the North East it does not bode well for the future and I implore you to have a good think about this.

Sadly this weekend the club said farewell, for the time being at least, to two of the above ‘workers/volunteers’ as Patrick who has so well assisted me over the last season with match reports and coverage with local radio and, I know, has thoroughly enjoyed himself in the role integrating with the Blues Squad so well is moving on to an internship with the Rugby Players Association in London.  My, and the club’s, sincere thanks to him as we wish him well in his new role.

Also moving on and across the sea to Ireland with her job is Trish who has latterly taken over the DPS role at the club after Ray left for pastures new last season and who has been a familiar and popular face behind the bar for some years now.  We also wish her well in this venture to the Emerald Isle and, like Patrick, she will always be welcome at Priory Park. Our best wishes go to both.

Away from the club the World Cup is getting to the end of the group stages with England beating a weakened Romania with ease on Saturday, Ireland also continue their unbeaten progress and Wales should also qualify for the knock out stages but the big game of the coming week will be England v. Scotland at 8.30.am. on Saturday morning after the Scots lost out a tense game against Argentina this morning as I pen these notes.  Weekends these days are now back to back rugby what with World Cup, Super League and National One.  Bliss…………………………………………