For ‘Clubman’, in the sporting arena at least, the weekend has simply been heaven with the Blues scorching to a high scoring victory over much fancied Stourbridge at Stourton Park whilst I was part of yet another KCC Second X1 victory at Saughall and this lunchtime (Sunday) my happiness was made complete when the Wire saw off, convincingly, the challenge of Wigan at the HJ Stadium and, with just one game left they could take top spot for the first time ever in Super League. 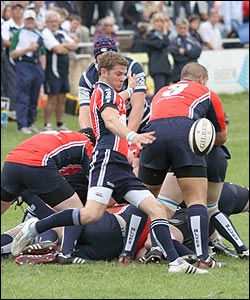 The Blues made it two five pointers to start the 2011/12 campaign and to score six tries away from home is no mean feat and it will give the new look squad plenty of confidence for the games ahead and they sit with this weekend’s opponents Sedgley Park in first & second spot but let’s just enjoy the moment as there is still much water to pass under the bridge but the first two results must give Geoff Wappett and his team great heart for the challenges ahead.

Around National One Sedgley Park entertained Tytnedale, never an easy team to beat, and ended up with a 29-10 victory to follow up their first weekend’s excellent 39-24 win at Cambridge.

Barking lost out to Rosslyn Park 19-0 in a London Derby, Blaydon trounced Cambridge 31-6, Fylde just edged it at Cinderford 36-34, Ealing beat Blackheath 26-21 in another London affair whilst new boys Jersey thrashed Birmingham 33-8 and Wharfedale bounced back from their defeat at Priory Park by beating Coventry 31-10.

This weekend the Rugby World Cup commences down under and in their first game England play Argentina on Saturday with a 9.30.am. kick off.  Priory Park will be open for this game on the big screen and breakfast will be available with the bar also being open.  Why not come down and then enjoy the league game with Sedgley Park that follows in the afternoon.  If England come up with the goods then we can look forward to more Saturday mornings at Priory Park.

In the first league matches for the other Priory Park teams it was not a good day at the office with all sides going down to defeats.  The Lions home to Preston Grasshoppers by 15-13, the Thirds at Birkenhead Park by 37-27 and the Fourths against Lymm by 30-20.  As I pen these notes I am not aware of the Vets result.

Macclesfield Rugby Club now has a new website and it is almost fully up and running with just some minor bits & pieces to be sorted.  Do have a look and any comments please to the club office. Early views look promising.

I have been asked to point out the new admission prices for this season at Priory Park which have caused some concerns, especially for non-members, at the increase from last season when they turned up for the Wharfedale game.

Members pay £10 which includes programme and car parking and of course they will already have paid a membership fee up front before that.

Non-members will pay £15 with concessions at £12 and that also includes programme and parking.

Having looked at prices for other clubs in National One I make no further comment.

A note for your diaries now with the first pre match dinner coming up on 24 September when Barking make a return visit to Macclesfield.

Contact the club for your reservation as this first one of the season is usually a busy one.

Finally I had contact earlier this week with Ben Coulbeck who I mistakenly believed may have retired from the game at the end of last season and he asked me to print the following comments on his behalf which I do with pleasure:

‘”Last season was my sixth, following a detour of Manchester and Rotherham, at Macclesfield RUFC – the club at which I feel most at home. Following a very successful league campaign in National One, my tenth season overall as a senior rugby player, I decided that I wanted to retire from the game and concentrate on my teaching career. It was a wrench to leave Macc but, having previously gained International caps and featured for Cheshire at Twickenham on two winning occasions, I felt it was the right time. I certainly didn’t have the motivation to face another pre-season and future inevitable ‘battles’ for selection.

“Rather than retire, however, I have now been given the opportunity to play for Northwich alongside old friends and former teammates in North West One. The club has ambitions for promotion and growth and I believe I can be more effective at that level now rather than at National One.

“I will certainly come down to Priory Park when I get a free Saturday and I look forward to seeing many of the friends I have made since beginning my playing career aged 18 alongside the likes of Jonny Keep and Phil Macey. I wish Macc all the best for the forthcoming season and I hope to see the club fighting for promotion in May, something they are more than capable of achieving.”