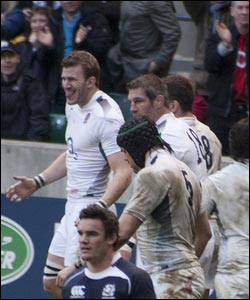 In case you may have missed it, Martin Johnson named his 30 man England Rugby World Cup squad yesterday. It probably didn’t come as that much of a surprise, as the papers had been telling us all for days now who was in, and who was out. Whether the squad of 17 forwards and 13 backs will be good enough to lift the trophy in a few weeks time is still up for debate. What is unquestionable is that the squad has real talent: however is there enough talent and strength in depth to take the ultimate prize in World rugby? Geoff Wappett tells us his thoughts about the England squad, and who he thinks should feel very unlucky to have missed out.

The England Rugby squad – is it good enough or strong enough to win the World Cup and were you surprised by some of the inclusions and omissions?

“The squad announcement didn’t really come as a surprise, as it was in all the papers over the weekend. Now obviously leaving Ricky Flutey out and taking 3 scrum halves may have taken some people by surprise, but not me. It’s similar in many ways to managing your own squad for a season: you need to plan for all eventualities and predict what might happen. So I can fully understand why they’ve chosen the team they have. You need to carry 2 scrum halves every game, so taking a third makes sense if injury occurs.”

So you’re happy with the squad that martin Johnson’s picked?

“I don’t know about happy – more resigned to it being inevitable. What does concern me is that they appear to be taking along some players who have injuries problems. Ben Youngs is only just coming back from injury, so they’re taking one hell of a punt on him lasting the distance. They’re taking a squad of 30 players, and about 4 or 5 of these have got serious injury concerns. Lewis Moody’s only just recovered from an injury yet he’s made the squad. The problem with Moody is that although he’s an inspirational figure, with the way he plays he’s always a walking potential injury concern: even if he starts a game a hundred percent fit, by the end you’d put your money on him picking up another knock or injury. Chris Ashton’s another one with a history of injuries. Personally it would worry me taking players who you can’t guarantee will last the tournament. It all right saying, oh so and so will be ok to play in 2 weeks time, but you finish up fielding a team that hasn’t really played together that much, and that would make me feel uncomfortable.”

What about Charlie Hodgson’s omission yet again?

“I think Charlie’s a great lad. I taught him from being 11 through to 16 at Bradford Grammar school, and have had a lot of dealings with him after that. So obviously my opinion’s a bit biased, but personally I would pick Charlie every time, and I’d definitely pick him in front of Toby Flood. He’s comfortably and convincingly the best fly half in England. He’s the one who can get a line working better than anyone else and is a real facilitator on the pitch. The problem seems to be with the selection process itself.”

“Poor old Charlie got what – 2 minutes here or 5 minutes there to show what he’s capable of. What’s he supposed to do in that time? As far as I’m concerned he’s just been messed about.  He was never given the opportunity to show what he’s got and demonstrate that he was ready for this. If the management team were seriously considering selecting him, they’d have given him much more of an opportunity to prove himself. They didn’t, and that to me suggests they’d already made their minds up even before the warm up games.  They were only going to take 2 fly halves and that was that.”

“Mind you what happens if one of them gets injured? Who’s going to step in when there isn’t any specific cover? Wigglesworth could do a job I suppose, but he’s not up to a regular fly half standard, let alone Charlie’s standard. We’re talking about the World Cup here. Is Wigglesworth really that good? I’m not sure he is. Ricky Flutey might’ve been a better bet, but they’re not taking him either.”

Has Martin Johnson got the balance right?

“That’s the 64,000 dollar question, isn’t it? Getting the balance right is always going to be the difficult bit. You need to choose not just the right payers, but also the right numbers and combinations. Apart from a lack of depth at fly half, the back row also seems to be a bit sparse. Moody’s the only specialist 7 being taken. Now Tom Woods can cover that position as can James Haskell, but they’re both naturally blind-side flankers and not specialist open-sides like Moody or Hendrie Fourie. The back row seems to be very generic and one-dimensional in the sense that 6, 7 and 8 are all very similar. There might be small differences here and there, but games are won and lost on small margins. The team that eventually wins the World Cup will have a squad that’s got variety and guile, not just consistency and like-for-like replacements.”