It couldn’t really have started much better than it has for Macclesfield Rugby Club this season. The Blues have played two and won two, both with bonus points. Not a bad start when you think about it. The supporters expected the team to hit the ground running this season after showing such promise last year, and to a large extent their wishes have been fulfilled.  So, we’re all happy. But, what about the Director of Rugby, Geoff Wappett?  Does he see things in the same way as you or I, or does he smile ruefully, take the points and note the areas that might need a slight tweak here and there? Well, the answers a bit of both as you might expect: take the win and the points, but always look to improve and strengthen. Macclesfield Rugby managed a few words with Geoff ahead of this weekend’s top of the table clash with Sedgley Park. Here are his thoughts: 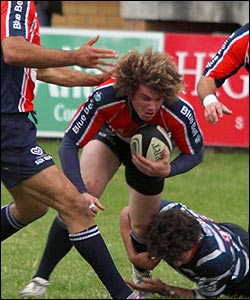 Did the season start brightly enough for your liking?

“The performance against Wharfedale was tidy enough. We responded to everything they put in front of us, and I think we responded pretty well. Whilst it didn’t necessarily have the spark we were looking for, it was workmanlike and we got the win we needed. The other positives at the end of the game were no injuries, a five point bonus and a pretty good start to the season really. So I guess there was no reason to grumble.”

What about the performance down at Stourbridge?

“The Stourbridge game was a different matter. Fergus Mulchrone was unavailable due to work commitments, but Matt Owen returned after his pre-season injury he sustained against Caldy. Other than that the team were pretty much the same. I have to say we were tremendous last weekend. In fact there was little I could fault the boys on. It was a really difficult day and very windy, so I immediately thought that was going to cause us a lot of difficulties, but none of it.”

“Ok we were 6-0 down early on after 2 long range penalty goals, but we just approached the game with great maturity and gradually worked ourselves back into the match. We absorbed the initial surge that you always get at away games, and then really took the game by the horns. We got to grip with things then and scored a couple of tries before half time. You could almost see Stourbridge’s body language change – like they were thinking, gee, what have we got to do to get out of this one?”

“The second half was pretty much the same. We opened by scoring a really good try, but then they started running everything back at us. To be fair to them, they scored two or three really good tries, but we just upped the pace and intensity of the game and recovered the margin. That really pleased me.”

“Obviously it’s still early days yet, and there are maybe a few little things we need to work on, like midfield defence and line out driving, but essentially the boys are really positive and fired up, but in a nice balanced way: they’re not over-confident or anything like that, just assured. I couldn’t really ask for a better start to the season. Let’s hope we continue in the same form.”

OK, so now you’ve got the big one this weekend: how do you think you’ll fare against Sedgley Park?

“Do you know, we only lost to two twice teams last year: London Welsh who were promoted and Sedgley Park. The last time we played Sedgley, had we beaten them, we wouldn’t be playing them this time. They were right down in the relegation zone. So consequently, I think they owe us one. It’s strange when you think back on it really: two games played, and neither were really an accurate reflection of my team.”

“The first time we played them it was only our second game in National League One. We played alright and were beating them until the last seconds of injury time, but we let them back in and allowed them to score the winning try with the last touch of the game. Our last performance against then at the end of the season really disappointed me. In fact I can honestly say after 4 years at Macclesfield, that’s the only game where I was genuinely disappointed. It was at the end of the season granted, but I thought it wouldn’t matter, even though we’d nothing to play for. But I just believed we could rise above that. Yet we didn’t for some reason.”

“This time we’ve got a lot to prove to ourselves. They’re obviously going well and are equally well-placed with 2 bonus point wins. But this is a good early challenge for us, and all the boys are looking forward to it. We want to put the record straight and prove that we can beat Sedgley Park. Those previous defeats should give the boys a bit of an edge. The really strange thing is when you look at the current table, you feel you need to look at it twice: first place Macclesfield, second place Sedgley Park, third place Fylde – all North West teams and all unbeaten. It’s been a long while since I’ve seen that, but it’s great none the less. Long may that continue I say, as long as Macclesfield have got the top slot.”