Macclesfield returned to winning ways this weekend in National League One with an impressive 36-21 victory against last year’s runners up Barking. 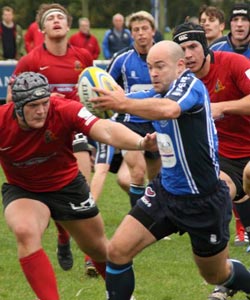 The Blues went into the game on the back of a disappointing defeat last time out against Blaydon, Director of Rugby Geoff Wappett said, “I think the first fifteen minutes was a direct response from the lads and I thought we were very impressive with the ball in hand.”

The game started at a frantic pace with the Blues looking to dominate from the kick-off. The home fans didn’t have long to wait for the first try of the game, prop Billy Robinson carried the ball over after just four minutes as the result of heavy pressure from Macc.

Tom Eaton assumed the kick duties in place of Ross Winney who started the game amongst the replacements, and was unlucky not to make his kick but the Blues lead 5-0.

The home team scored again just six minutes later when some quick thinking from scrum half Charlie Mulchrone saw him break through the Barking line and touched down under the posts. Eaton stepped up and converted confidently and Macclesfield now lead 12-0.

Barking seemed to have no answer to the Blues attack and were struggling to establish a foothold in the game. They were denied a certain try thanks to some superb defensive work from Tom Davenport who managed to get the ball into touch just inches from the try line.

They were eventually given the opportunity to get on the scoreboard when Macclesfield conceded a penalty just 25 yards from goal, Chris Ashwin converted with ease and Barking now trailed by nine points.

Just moments later Ashwin was again given the chance to score with a penalty and he did not disappoint the travelling fans as he slotted the ball between the posts with relative ease. With the score now 12-6 there was all to play for.

Barking were soon on the back foot once again with Macclesfield driving forward and piling on the pressure. The Blues were rewarded on the stroke of half time when Alan Marsh drove the ball over the line to give Macclesfield a 17-6 lead at the break.

Barking emerged after half time looking far more confident and from the first whistle took the game to home team. Just one minute after the restart the Blues conceded a needless penalty and Ashwin again took his chance to bring Barking within 8 points of the lead.

Though any hopes of a dramatic Barking comeback were soon extinguished when Captain Tom Eaton scored Macc’s fourth try of the afternoon and the fly half also stepped up to convert to give the Blues a 24-9 advantage.

The away teamed continued to come at Macc but to no avail and on 55 minutes prop Robinson capped arguably a man of the match display with his second try of the afternoon. Eaton’s kick went wide but the Blues looked comfortable at 29-9.

Barking rallied late on and scored two tries through Steven Woods and the impressive Ashwin but victory was sealed for Macclesfield when Matt O’Regan scored just four minutes from time. Winney stepped up to add the extras and the Blues claimed yet another maximum point victory.