Macclesfield secured their third straight league victory of the season with a 40-26 win against local rivals Sedgley Park. 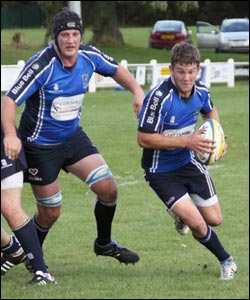 In what was a high scoring game that included nine tries it was the Blues that emerged victorious and kept up their perfect start to the season.

Director of Rugby Geoff Wappett said, “I was very impressed with how we played, I thought for large parts we controlled the game and were confident going into every match.”

The hosts raced into a 10-0 lead after 13 minutes thanks to a Ross Winney penalty and Jack Morehouse try. The talented centre was allowed the opportunity to score after a very impressive passing move from the home team.

The game was end to end and Sedgley soon responded with a try from Greg Smith, as the Blues found themselves exposed on the left hand-side the full back took full advantage and raced in to score. Smith also stepped up to convert making the score 10-7.

The game once again swung in Macc’s favour when Sedgley conceded a penalty within close range, Winney again stepped up and added a further three points.

This was soon followed by the Blues second try of the afternoon, Gavin Woods touched the ball down after great persistence from himself and Jack Stott-Sugden. Winney added the extras and the Blues led 15-7.

Yet again Sedgley came back at the hosts; scoring two quick tries on the half hour from Louis McGowan and Jamie Harrison, both were somewhat gifted to the visitors but credit must go to Harrison for the way he finished a superb solo run.

Sedgley now how the lead for the first time in the game and looked to being taking a 19-15 advantage in at half time.

Though a needless yellow card for Henno Venter on 38 minutes gave Macc good field position and the Blues took full advantage with Matt O’Regan touching down in the corner from subsequent attack and it was the home team that had a slender 20-19 lead at the break.

Macclesfield began the second half full of confidence and scored almost immediately after the restart, Winney was again given the opportunity with a penalty kick and duly converted.

The lead was extended further five minutes later when arguably man of the match Ryan Parkinson scored Macc’s fourth try and secured the bonus point. Winney slotted the ball between the posts and the Blues now had an eleven point lead.

The visitors again came back at Macclesfield and refused to be beaten, they were rewarded for their efforts on 58 minutes when replacement Luke Wooley broke through to score and Smith confidently converted to make the score 30-26.

The Blues wrapped up victory in the final stages of the game with yet another penalty from Winney and a fine try from Fergus Mulchrone. With the final score 40-26 Macc claimed their third straight maximum point victory and continue to march forward.