Anyone who wondered what Macclesfield Rugby Club’s reaction would be following the away defeat to Blaydon, didn’t have to wait too long to discover that the loss hurt deeply, and that they were determined to put the score right. It only took the Priory Park supporters 12 minutes to realise that the team were up for this one, and firing on all cylinders again. But what of director of Rugby and Head Coach, Geoff Wappett: was he happy with the winning display and 6 try scoreline? Is he satisfied with the level of performance at the moment or does he still see areas where there is room for improvement? Macclesfield Rugby caught up with Geoff this week and gets his views on the Barking game, the upcoming fixture against Cambridge and his thoughts on the two teams heading National Division One, Fylde and Ealing Trailfinders. 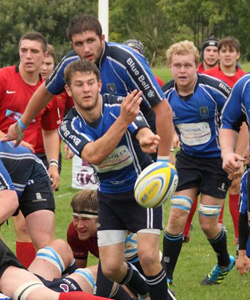 Were you satisfied with the performance on Saturday?

“Yes, I thought we showed up and answered some of our critics, which is what I was expecting. On Tuesday night I sat the boys down and told them a few home truths about the Blaydon game, and we followed that with a really good session. It showed as well: the first 20 minutes against Barking was brisling. We really played extremely well for that first quarter and looked like a team on form.”

“But we do suffer a little bit at times by taking our foot off the accelerator. Once we’ve beaten the opposition down, maybe not quite into submission, but have got them on the floor, we have the habit of letting them get back up again. We haven’t quite developed the bullying element within our game yet, and lack that killer instinct. There’s no point, as far as I can see, in getting a team on the floor and pressing your foot to their throats, if you’re going to let them get back up again. We really have to work on that. It’s been a problem ever since I’ve been here at Macclesfield, and I’m not sure why that is. We’ve got to learn to strangle the opposition and keep on tightening our grip, rather than be generous and too kind. The problem is once you’ve got a stranglehold on the game, if you surrender it, it’s almost impossible to rediscover it again.”

Are you satisfied with Macclesfield’s defence at the moment?

“For the first 20 minutes we looked excellent. We were 12 nil up and it looked like there was only one team in it. We scored 6 tries again, so I’m certainly satisfied with our attack. They got their two tries in the last 10 minutes, so we need to work on defence some more. We can’t afford to let any team back in for anything. What we need to work on is our individual defence, tackling and footwork in tackles and our team organisation.  We need to make improvements.”

What about the game at Cambridge: how will that unfold?

“Cambridge set off rather poorly after being let down in pre-season. I don’t think they managed to get any warm-up games under their belts, so started off the season slowly. But during the last 3 games they’ve picked up some form and are getting back to where they were last year. They’re a good side. Last time we played them, we played extraordinarily well and we did this because we kept hold of the ball. We’ll be aiming to do the same this time. If the opposition can’t get hold of the ball, they can’t punish you. Cambridge’s strengths are when they’re running with the ball: if they have a weakness is that they struggle when they haven’t got it. We’ll therefore concentrate on keeping the ball for long periods and exposing them at the appropriate times.”

It’s important to keep pace with Fylde and Ealing isn’t it: are you keeping an eye on them?

“I’m always reluctant to give teams like Flyde too much credit, as they’re generally not slow at doing that themselves. So, they don’t need my help. They’ve had some pretty tight games and have only scored 8 more points than Macclesfield over the first 5 games. In that sense there’s little to choose between us, except they’ve won all five and we’ve only managed 4 wins. But I’m looking forward to playing them. The thing is, until you’ve played everybody, it’s difficult to make a judgement about where you stand. Having said that it’s amazing how quickly a 5 or 6 point gap’s opened up between the top 3 teams, Flyde, Ealing and the Blues and the rest.”

“Both Flyde and Ealing are good teams and both pose different problems for other teams. By the same token I think those 2 teams will be looking at us and wondering how they’ll fare. Our forwards would cause either of them a problem, and they know that. By the same token both of them have got wingers of extraordinary ability who can cause any team problems. Ollie Brennand and Nick Royle are both top quality, but I think Ollie is the real threat as he’s such a fantastic rugby player. It’s the same with the Ealing Trailfinders too. They’ve got a couple of quality wingers in Chesters and Bruynseels. I think Phil Chesters scored about 45 tries last season. What gives me some comfort is that, however quick you might be, if you haven’t got the ball, there’s isn’t much you can do, is there? So, I can’t wait.”