This weekend saw Macclesfield secure their straight victory in National League One with a thrilling 49-31 victory over Stourbridge. 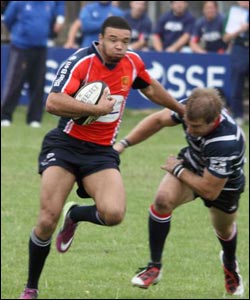 The Blues travelled to the midlands in confident mood after their opening day victory against Wharfedale whilst the home team were searching for their first win of the season after a disappointing 39-24 defeat at Tynedale last time out.

The Blues were up against it almost immediately conceding a needless penalty after just 15 seconds, fly Mark Woodrow stepped up to convert and the home team lead 3-0. Things got worse for Macc when after four minutes another penalty was awarded to the home team and Woodrow again converted to take the score to 6-0.

The Blues began to work themselves into the game and their confidence grew with every attack. They got their reward after 15 minutes when Ross Winney finished a superb team move to score Macc’s first try of the game. Winney converted his try and the Blues took a 7-6 lead.

Just four minutes later the Blues increased their lead further when Winney added a penalty from close range and Macc were now ahead by four.

Stourbridge responded almost immediately when full back Matt Williams burst through the Blues defence to score the hosts first try of the day. Woodrow failed to add the extras but Stourbridge had a slim 11-10 lead.

It was very much an end to end game and both sides were playing fluid attacking rugby. The game once more swung in Macclesfield’s favour when centre Jack Morehouse carried the ball over the line on 25 minutes. Winney continued a solid kicking display with another conversion and the score was now 17-11.

Though once again Stourbridge went on the attack with Woodrow making a highly impressive drop goal attempt to bring the home team within three points of the Blues.

The Blues took the advantage just before half time when Tom Mantell touched down after some high quality play from the Macc forwards. Winney was unable to convert and the Blues went in at the break leading 22-14.

The second half began with the Blues scoring almost immediately, Ed Stobart broke down the right hand side and scored his first try for the club. Winney stepped up to convert and the Blues were 29-14.

Again Stourbridge refused to lie down and Liam Wordley scored his third try in two games after 50 minutes though again Woodrow failed to convert the try and the home team trailed by ten points.

Perhaps the turning point of the match came on 54 minutes, Macclesfield were absorbing large amounts of pressure from Stourbridge when scrum half Charlie Mulchrone intercepted a pass on the half way line and broke free from a number of Stourbridge tackles to score. Winney slotted the ball between the posts and the Blues looked good at 36-19.

The home team continued to fight and refused to give in, just after the hour mark Nathan Bressington scored their fourth try of the afternoon and Woodrow added the extra points to take the score to 36-26.

Victory was confirmed when the Blues scored two penalties and a try in the final 15 minutes of the game. Matt O’Regan was the man that scored and along with his two penalties Winney added the conversion to take the score to 49-26.

A late Ben Hughes try was in vain for Stourbridge as Macclesfield secured yet another maximum point victory and continued their perfect start to the new season.