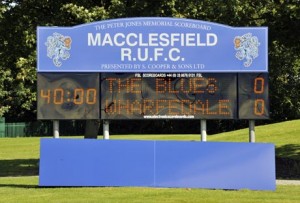 Members who came along for our first National League 1 Match of the Season against Wharfedale, benefitted from,  and marvelled at the sight of the latest development at Priory Park.

And a  most visual one at that!

This being the unveiling of the new all, singing, all dancing, Electronic Scoreboard,  placed in situ at the Priory Lane end of the Pitch and dedicated henceforth  as The Peter Jones Memorial Scoreboard,  to remind us always  of the recent loss to the Club of our much loved and respected  President Peter Jones, after he eventually lost his bravely fought and long ongoing battle against the dreaded “C”.

Since the Club made it’s move to the delightful surrounds of  Priory Park many years ago,  the scoreboard has been an immediately visible  feature seen by all as they arrive and watch.

It’s presence and regular use for all our Home Matches,  has given a distinguishing feature to the whole set up and has seen the progressive development up the Rugby Union League Ladder, especially in recent years.

And seeing,  in that intervening time,  Matches played at International and County Level, as well a nowadays our regular League Matches against Clubs with established histories at the highest levels of the game.

During that time,  the operation of the Board  has been  regularly overseen and undertaken,  to a great extent, by the Jones Family every Saturday,  on duty keeping up with the progressing scores as the game went on.

In past years this task was regularly undertaken by the younger Jones,  in the form of various Grandsons  until they developed their Rugby skills to follow Grandad, Peter  and Dad, Richard onto the field to carry on the rugby tradition inherent in the family.

Thereafter that task was invariably willingly carried out for the Club by Peter’s wife Dot –  a regular sight at that end of the Pitch,  striving, in all sorts of weather,  to keep up with the progress being made by the Blues on the field below!

This service being much appreciated by Members and Visitors alike distinguished  the Club through the foresight of those in those early days,   who chose to provide such a facility before they became as popular as they are now

But time moves on,  and recognising the progress being made by the Club, our local Supporter, Advertiser and benefactor,   S.Cooper & Sons, formerly of Bollington but now based in Winsford  added to their previous generous donation of the large screen Television unit in the Club house,  by financing the addition of this most impressive facility .

This  means no more standing in the cold and wet,  at the side of a Board hanging up the numbers in the  time honoured manner,  as the scores  mounted,  but enables spectators to follow the progress of the match  in terms of identification of the Team playing, the Scores and progressive timing towards eventual No Side, via the use of a Remote Control from anywhere in the Ground. Progress indeed.

The Club, through the Blues upwards progress  to a situation within the  R.F.U.League structure to being in the top 30 Teams in the country, can thus now also  pride itself to being at the forefront of the game  in terms of the environment at Priory Park,  enhanced by this new development shining brightly from that far end through every game.