If you’re a supporter of Macclesfield Blues and regularly take a trip down to Priory Park on a Saturday afternoon, you must be pinching yourself right now. Played 3 and won 3 and all with bonus points. It’s fantastic really, and nothing can really take the shine off this fine run of form, not even England’s lousy performance against a team they’d apparently already beaten before a ball was kicked. But, what does a head coach do after such a great set of results? Does he sit back and simply ask for more of the same, or does he analyse everything that’s gone on and try to spot any areas that could prove to be problematic in the weeks and months to come. Well, you can imagine what Geoff Wappett’s answer to that would be, can’t you? Here he gives Macclesfield Rugby his thoughts on Saturday’s game and ‘looks forward’ to next weekend’s long tip up to windy Blaydon. 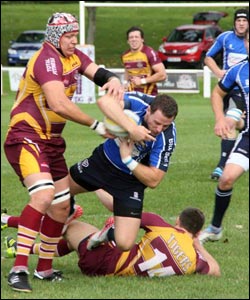 So, were you pleased with the Sedgley Park result?

“Oh yes – absolutely. We’re going steadily along at the moment and that’s really good stuff. It’s going well and I have to be satisfied with that, don’t I? We’re scoring tries with ease and don’t seem to have any problems creating opportunities. So, it’s all positive from that point of view. But what we’re also doing is giving points away. Now, it might seem churlish to grumble about that when we’ve played 3 competitive games and won them all with a bonus point. Yes Sedgley may have scored 26 points, but we scored 40. But I suppose it’s all about looking forward for me and keeping one eye on the future.”

“ What I don’t want the boys to develop is that sort of attitude that says, well whatever you score, we’ll score more, because as far as I’m concerned that’s a dangerous philosophy to adopt and it might come back to bite you at some future stage. I’d much prefer us to score fewer points, but be a lot tighter defensively than we are at the moment. So that’s what we’ll now be working on. If we can address that problem, then with our scoring potential and the ability to create chances, out of nothing sometimes, then we should be well set up for the rest of the season.”

What about the prospects of the trip up to the north East?

“It’s a long old haul up to Blaydon, and it’s not exactly welcoming when you finally get there either. Obviously, I don’t mean the hospitality of the people, just the weather and the environment. It’s really our first long haul of the season as it were, and we have to learn to manage these away games well. Stourbridge, relatively speaking, was just like a little trip down the road.”

“We did pretty well managing all the logistics of away games last year, so we’ll just build on that. It’s all about setting off at the right times, having little breaks, making sure we stretch and keep mobile at these breaks, getting to the ground at the right time and making sure we’re in the right frame of mind. Managing these trips is all about using the spare time profitably and not letting player’s minds wander off and lose focus.  It’s a fair old trip up there, and nearly takes as long as getting to London so we’ll need to keep our minds on the job in hand on the journey.”

“We had two convincing wins over Blaydon last season. I think we beat them 33 nil at home, and we were also quite convincing away at their ground. But, they’ve strengthened over the off-season, particularly in the forwards and they’re going quite well I believe. They’ve won one game, lost one narrowly and only just lost the derby with Tynedale, so they’ll be hurting at that and wanting to get back to winning ways. That probably means they’re going to be a difficult side to play, but you can guarantee we won’t be taking anything for granted, believe me. It’s not the easiest of pitches to play on as it’s got a bit of a slope, and more often than not when I’ve been up there the weather’s never been particularly kind. Obviously in an ideal world you’d prefer a bit of sun, but looking at the weather at the moment, that doesn’t look likely.”

It's #MentalHealthAwarenessWeek Rugby clubs across England continue to support their members' physical and mental wellbeing 👏 Including @WelwynRugby, @BSRUGBY, @MaccRugby and @BicesterRUFC just to name a few. Here's how ⤵

Remember if you have a special occasion let us know!!!

"I think Cheslin Kolbe is an inspiration in his own right, at 5ft 8 with sparkling feet, his ability to make international rugby players look amateur is a skill in itself" - @ugomonye Kolbe is a class above 🤩🏉 #RugbyTonight