Well, Saturday’s result wasn’t in the script. Nobody saw it coming. Now you can make excuses or rationalise why it may have played out as it did, but the truth is everybody connected with Macclesfield Blues expected a minimum of four points from the trip up to Blaydon, if not 5. That’s not meant to sound disrespectful to the lads from the North East. Macclesfield Rugby Club has been flying, and was one of the three in-form teams in National Division One, so the supporters simply expected a win. Still, you can’t take anything in life for granted. Every thing worthwhile has to be earned in one way or other: and so it was up at Blaydon. Unfortunately, the Blues for once weren’t up to the task. However, according to Director of Rugby and Head Coach, Geoff Wappett, perhaps this setback may come to be seen as a blessing in disguise in the months to come. The Blues can learn from this defeat and use the experience to bond further and develop as a team with ruthless and complete focus. Here Geoff talks to Macclesfield Rugby about the surprise result and what lessons he thinks this will teach the boys. 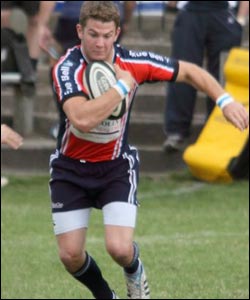 So, how much of a surprise was that defeat then Geoff?

“Saturday’s result was a huge disappointment. We never got going – it’s as simple as that. It just seemed that we couldn’t find any enthusiasm for the job. Defensively we were giving points away left, right and centre, and we were just second best to most things. Yet, in the midst of it all, there were little flashes that showed what we can really do. When we finally managed to gather ourselves, we scored a couple of tries and then went in for the bonus point after scoring the fourth try. But by then it was far too late. “

What, if anything, went wrong?

“We had a bit of a blow by losing Sam Moss, our hooker, with a bad back and we were already without Tom Mantel. So we went into the game slightly weakened front row than normal. It was a bit unfortunate and certainly unexpected, but you have to deal with circumstances like these. The problem was that Blaydon’s real strength was in the front row. In fairness to them, they made that tell and did a good job on us. But, having said that, that’s no excuse to justify our performance, or more our lack of performance. We were just off the pace the whole game.  Now you can sit and analyse what happened, but the truth is there’s no logical explanation for it. It’s annoying obviously, because it would be easier for me if I could come up with some sort of logical explanation, but I can’t. All I can do is change things, or do something that makes sure it doesn’t happen again.”

“I could tell there was something not quite right from the very start of the game. We put a box kick up. Now we’ve practiced these over and over a hundred times or more, and it’s second nature to the lads. The kick went up, Ed Stobart chased it up, the winger caught it and he ran it back at us. We just hadn’t got the players in the right positions to defend that, and normally we would’ve done. It didn’t really matter that the attack came to nothing: for me it was symptomatic that all wasn’t well. Our defence got broken too easily, we didn’t clear out the rucks. Normally this wouldn’t be a problem, but on Saturday the players just didn’t have their match heads on for some reason.”

Are there any positives to be had?

“The one thing that gives me some encouragement is that we’ve never lost two games on the trot. When we have lost, we’ve got together and talked it through, saying come on, this isn’t the way. We’ve addressed what we thought were the problems, and talked about how we could correct them: and the week after we’ve always got a result. So in that sense I’ve always been very pleased about the team’s mentality and spirit. It’s the attitude that’s important. That’s something I’ve always felt about rugby: get the attitude right and the results will follow. So if you’ve got all 15 lads singing the same tune, with a real do-or-die attitude, you’ll generally get the results you want.”

So, what do you say to the players at training? Is there a specific problem you’ve identified?

“We’ll get together tonight and on Thursday and bash out one or two home truths, and set about sorting out the system to ensure a win at the weekend. We really need to keep pace with the teams above us, and can’t afford to let too much daylight stand between us and them. So we’ve got to keep our eyes on Flyde. We play them at the end of October, and I’m looking forward to that. It’ll be a real good challenge. Still that’s in the future: we have to concentrate on the present, and that’s what’s so annoying. If we can get the mood and the attitude right all of the time, then from a technical rugby point of view, I don’t think there are many teams that’ll get the better of us. We just need to change the mentality so that we always are in the right frame of mind and always have the right attitude.”

“Still, that’s what makes sport fascinating to me. There are so many different aspects to a game. You can get all the technical bits functioning like clockwork, but if the mind’s not fully operational then you just won’t perform up to the standards you’re expecting. My job now is try to use these two days to get the players heads into the right place. How do I do that? I couldn’t tell you really. I just do.”

“It’s no different than writing or any other job in life: some people can do it and make what they do look easy and natural, whilst the rest of us watch on and wonder how they manage it. Well, it’s the same with this. It’s just something I do, and have done for a long time. I’ll get there early tonight and be waiting for the players to arrive. I don’t know what I’m going to say yet, but I will when the time’s right. I’ll catch the players when they arrive and pull them aside and have a quiet word. Something inside will let me know what to say and it’ll just come out. What I feel at the time will determine what I say to the players. Some of it’s down to experience, some intuition I suppose.  Some people might choose to intellectualise it, but for me it’s that simple. I’ve been around long enough to know what to say and when the right time to say it is.”