On some days rugby matches can’t go on for long enough. If you’re on top of your game and scoring for fun, you never want the game to end. On other days though, when you’re holding on for a result and not playing as well as you’d like, you want the referee to blow as soon as the time’s up. Saturday’s game against Rosslyn Park was one of those games. It was the second home game in a row that Macclesfield Rugby have lost on home turf at Priory Park. The defeat against Tynedale was deserved in many ways: the Blues were outplayed and outscored. The Rosslyn Park game was a different matter. Had the ref blown the whistle promptly on 45 minutes, Macclesfield would’ve come away with a 5 point win. But he played on for a further 2 minutes, in which time the opposition scored. The Blues had to take solace from 2 losing bonus points. So what did Director of Rugby and Head Coach, Geoff Wappett make of it? Is something fundamental going wrong, or was it just another one of ‘those’ days at the office we all suffer from time to time? Here Geoff talks to Macclesfield Rugby about defensive patterns, doggedness and determination, and looks forward to the weekend fixture against Coventry. 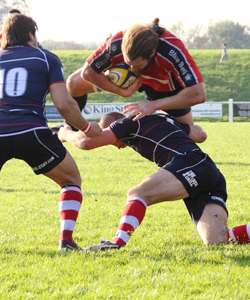 The loss to Rosslyn Park wasn’t one most people were expecting was it? Can the team regain its confidence in time for next week?

“Yes, of course they can. We played and we lost, it’s that simple. We still are confident and we’ll get back on track. There isn’t a problem as such. There’s nothing a straightforward win wouldn’t solve. It was touch and go right up to the end. We’d played for 46 minutes when they scored. It was just one of those games where you just weren’t sure how long they were going to play. The problem is that with some referees you don’t know where you are.  At the end of the day I thought we deserved the win. But, I guess 2 bonus points is some sort of consolation. We’re leaking points down the middle of the field, and we’ll address that problem this week.”

“What you can’t address is the fact that we didn’t kick our goals during the game. Of course you can practice place kicking, but some days it just doesn’t happen or go right, and you have to realise that there’s not much you can do about it. You have to accept it. Ross Winney made his way back into the team, and one of his major assets is kicking goals. Unfortunately, for one reason or anther he had a bit of an off day on Saturday. On any other average Ross Winney day we’d have won the game quite comfortably. We scored another 4 tries again, like Rosslyn Park, but you have to feel disappointed and sad that we only picked up 2 points, rather than 5.”

What are you going to concentrate on in training this week?

“Well, not attack, let’s put it that way. Scoring doesn’t seem to be a problem for us. We’re creating opportunities and taking them, so that’s good news. As long as you’re doing that, you’re always in with a shout of winning a game. But we’ve now got to work on ways of stopping the opposition from scoring. How we go about that will be the important thing. Obviously there are things we can do, but you don’t want to give all your secrets away do you? You never know who might read this. If you put too much emphasis on certain areas of the game where we think we might not be playing as well as we’d like, others may read our website and focus their game plan on those areas. All that will do is exacerbate the problem to my mind.”

“The thing is, we’ve had a few defensive problems all season, and even in pre-season to be honest. Since then we’ve worked hard to address these problems. Against Cambridge we managed to defend very well and that pleased me as they’re a very attack-oriented side. We thought after that we’d gone some way to solving our defensive problems. But the same problems reappeared against Tynedale, and they were still there on Saturday. So all we can do is work with the players we have and try to solve the problems. It’s just that we’re not getting the results we’d like. You can work on defensive patterns and figure out how you’ll defend against certain attacking situations, but none of that matters if you miss those first off tackles and don’t make the hits. We need to be more determined and more dogged. It might be that we need to make some changes in personnel in that area at some stage to achieve what we’re looking for. We’ll see.”

What are you expecting from the Coventry game?

“Well, I’m expecting a positive reaction from the players. Coventry have been playing pretty well recently. They set off without scoring many points, but they’ve managed to overcome that now. From what I read, they’re quite pleased and proud of their forwards, and are more than happy with their performances. We’ll need to be on top of our game to match them, though we’ll certainly be looking to take them on in the pack. I expect it will be a bit of a tussle. It will be interesting to see what the ground conditions are like, because it can be a bit heavy underfoot there, and that might influence the direction of the game. We’ll aim to match them in all departments and will definitely go into the game with a positive attitude.”