A Fergus Mulchrone hat-trick was the difference as Macclesfield sealed a narrow 35-32 victory away at Cambridge. 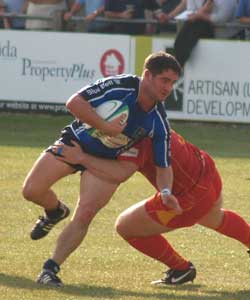 Macc got off to a flyer racing to a 19-0 lead after 13 minutes, Tom O Regan cutting inside off the left wing to score next to the posts.

Fly Half Tom Eaton added the conversion before the Mulchrone brothers combined for the first time, Fergus latching on onto his sibling’s box kick to finish brilliantly.

Blues then stole a lineout in Cambridge territory, leading to Moorehouse collecting the ball in midfield, evading two tackles before cutting inside and beating the home side’s full back to the line.

Eaton’s conversion hit the post, but the damage had already been done, Cambridge on the brink of a humiliating defeat.

The intense heat made for difficult conditions and the officials sensibly decided to stop play for a drinks break after twenty minutes.

The break did the visitors no favours as Cambridge looked to have regrouped, taking a stranglehold on the game,Tom Wheatcroft scoring the home side’s first points of the match from a penalty.

Wheatcroft’s accuracy with the boot became a recurring theme for Cambridge and he added a second penalty shortly after.

With six minutes to go to half time, Cambridge were playing all the rugby, but Macc took the wind out of their sails, Matt Owen breaking off the back of an attacking scrum to set up Fergus Mulchrone for his second try to lead 24-16.

The half ended on a sour note for Macclesfield though; lock Alan Marsh sin-binned by referee Simon Harding for repeated infringements at the ruck.

The second half continued as the first half left off, Cambridge dominating their opponents with the lion share of both possession and territory.

Mogensen could have added a second try, only for Ed Stobartto make a superb last ditch tackle; though Wheatcroft added two penalties to reduce the arrears to just two points.

Just as it looked like the match was going in Cambridge’s way, Mulchrone completed his hat-trick, capitalising on a number of missed tackles to score.

Eaton missed the conversion, but the lead was extended to seven again.

After a second drinks break, Wheatcroft reduced the arrears to four, before Tom Fidler popped up to score his side’s second try, putting Cambridge ahead for the first time in the match.

With seven minutes to go, the match was hanging on a knife edge, and Eaton held his nerve to level the match from the boot.

Eaton was in action again and landed the decisive penalty with three minutes to go.

Cambridge had one last chance to get something out of the match, but Wheatcroft couldn’t find touch with a late penalty.

The match ended with Blues earning a deserved five points, while Cambridge would have to settle for a losing bonus point.

The win is Macc’s second in a row and moves them to second in National League One, while Cambridge’s unbeaten run of three matches is brought to an abrupt end, and will have to regroup against Coventry.