After their heroics in Auckland our feelings as ‘rugby people’ must go out to that Welsh Squad who did so much for their country with their example of how to go about being ambassadors of our great  game during the RWC2011 and whilst many will give their opinion of the red card dished out by Alain Rolland which contributed to their defeat at French hands its writ large in Law 10 sub-section j and whilst his decision has caused much comment in the media and beyond its done and it is France who will hand the All Blacks the World Cup next Sunday morning but it is Wales who will return home and clearly be a threat to the remaining home nations for a few seasons now with the RFU in complete turmoil and England at the crossroads. 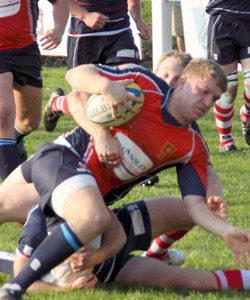 In my humble view the incident was a yellow card + citation and it will be interesting to see how the disciplinary body deals with it.  Watch this space.

Back to matters Macclesfield and the Blues suffered a rare double defeat at Priory Park when Rosslyn Park snatched a ‘W’ in injury time with a try in the corner.  At least the home side has the small consolation of two bonus points for scoring four tries and being less than seven points in arrears but that counts for little when it should have been five and one or two will be doing some extra defensive work in training this week before the trip to Coventry on Saturday.

Those bonus points despite the defeat means that the Blues still remain second in the table behind Ealing Trailfinders who made it eight out of eight with a convincing 38-8 victory at Park Lane over Sedgley Park.  Fylde fell at Cambridge to the tune of 49-29 and our next opponents Coventry defied the odds to win 32-27 at Tynedale in this topsy turvey league where little can be judged on the form book!!

Other results in SSE National One saw Barking continue their good run by beating Birmingham Solihull 33-29, Blackheath winning at Blaydon 25-20, Jersey edging it 19-18 at Stourbridge and Wharfedale beating Cinderford 33-25 which all goes to show that little can be taken for granted as the form book is thrown away most weekends somewhere.

Around Priory Park the Lions won convincingly by 86-0 at Liverpool St Helens but the Thirds lost out 40-18 to Leigh Seconds. The Fourths beat Holmes Chapel Two’s 61-10 and the Vets just lost out 15-8 at Sheffield Tigers.

Before the game on Saturday there was another pre match dinner enjoyed by sixty odd members and our guests from Rosslyn Park.  The next couple are to be held on 12 November when Blackheath visit and then on 10 December as the campaign reaches the half way stage and Stourbridge are visitors. This dinner will be our Xmas event as there are no league games planned for 24 & 31 December.  If you are interested in attending either of these then make it known to the club office.

Due to the unusual winter last time round the national league have kept a few dates clear for potential cancellations due to the weather and presently they are 4 February, 25 February, 17 March and 7 April.  Let’s hope they don’t need to be used……………..

It may be that a number of you may wish to travel to Coventry on Saturday to support the Blues and if so the kick off is scheduled for 3.pm. and they play at Butts Park Arena, The Butts, Coventry CV1 3GE.  Brief directions: From Junction 7 of the inner ring road go straight up to and over traffic lights. Pass the old Technical College on the left and ground is just past again on your left.  Entrance opposite BP petrol station.

Coventry have a long and proud history and were formed back in 1874 and Director of Rugby is Phil Maynard with another former International Peter Rossborough as President.