Blues coach Geoff Wappett is confident his side can bounce back after losing 35-25 to Coventry on Saturday. 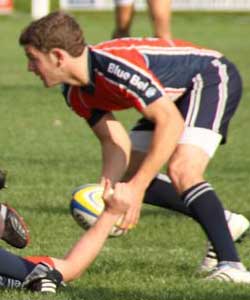 Macc scored four tries for the second week in a row but couldn’t prevent a third straight defeat.

Tries from Josh Fowles, Tom Davenport as well as a try apiece from Fergus and Charlie Mulchrone sealed a ninth bonus point for Macc but that was all they brought back to Priory Park.

Wappett said: “It was very disappointing. We played very well in the first 15 minutes and looked the much better side.

“We just had a mad ten minutes when we let them bully us and we conceded 22 points.”

Macc had the majority of possession early on and managed to convert that pressure into points after eight minutes, the pack turning the screw at the scrum before Charlie Mulchrone found his elder sibling Fergus in open space to cross the line and take a deserved lead, taking the family tally to 17 tries for the season.

Though Tom Eaton couldn’t add the conversion, Blues looked good for their lead and there was a feeling more tries would be on the way.

Macc continued to dominate, finding themselves camped in Coventry territory, and began to force mistakes – the Coventry kicker sending a simple touch finder out of the in-goal area, handing possession back to blues.

Cov did get on the scoreboard not long after through captain Luke Myring, the centre adding a penalty to reduce the deficit to just two.

Macc remained on the front foot up until the first quarter of the match, testing the home side’s defence with wave after wave of attack, only for Cov defences to hold firm.

What followed soon after can only be described as a mad ten minutes as there was a role reversal with Coventry moving from defence to attack in an instant, running in three tries to race to a 22-5 lead.

Having been the only side in the contest at one stage, Macc found themselves pinned back on their own line with no plan for escape going into the break.

After half time, Blues chances weren’t helped by the inexplicable sin-binning of flanker Richard Wigham, causing a number of confused faces in the Macc dugout.

Coach Wappett rang the changes at half time, Ross Winney coming on in the midfield to add an extra kicking dimension at centre.

Blues responded brilliantly after going down to 14, and doubled their score after Fowles scored brilliantly with a superb individual effort.

Winney added a penalty not long after as Macc began to play with a renewed vigour.

Tom Davenport reduced the arrears even further, combining with Eaton to score well, Winney unable to add the extras.

Macc returned to their full quota and began to turn the screw again, racking up over a dozen phases on attack – the Cov defence holding firm as Macc sensed the comeback was on.

The comeback was almost complete when Charlie Mulchrone ran through to bring his side right back into it, Winney adding the conversion as the score was reduced to just four.

Just as the Blues were back in the game and had silenced the sizeable home support, Cov hit Macc on the break as a pair of missed tackles let Heath Stevens through for a breakaway try which sealed the match for the home side.

Coventry held out for a narrow victory, condemning Macc to their third straight defeat.

Geoff Wappett was left scratching his head after the defeat saying “We shot ourselves in the foot with the inconsistencies.

“We’ve been on the wrong side of a couple of close matches in the last few weeks, had we been on the right side like we were at Cambridge, we wouldn’t have these issues.

“It wouldn’t take a lot to change the results around so we’re not in a crisis just yet.”