After Saturday’s rain-sodden game at Priory Park and the loss against Tynedale, you rightly expect everyone associated with the Blues to be downbeat and disappointed. You’d be surprised however. Obviously, Macclesfield Blues are disappointed. Why wouldn’t they be? Nobody likes to lose, especially at home. But, now isn’t the time for recriminations; It’s time to look forward and plan for the next game. Director of Rugby and Head Coach, Geoff Wappett was surprisingly upbeat when we spoke to him this week, despite the weekend’s result. Here he talks to Macclesfield Rugby about bad days at the office, moving forward and playing to your strengths, not to mention thanking his lucky stars that at least he’s not Martin Johnson.

So, the second loss of the season and at home – what happened? 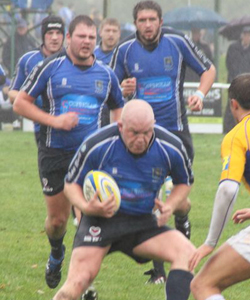 “What happened? Well, that is the $64,000 question. I’ve asked myself that over and over since Saturday, and I don’t really know. In the first half we played well enough. The conditions didn’t help, with constant drizzle throughout the match, but it was the same for both teams. The problem was that because the pitch had a lot of grass on it, the water was held on the top and that made playing conditions difficult. We were on top, and just lost momentum towards the end of a movement with a little mistake here and there. Now, I can look at it and think, well, maybe we just weren’t right on the day, and that things just didn’t click for some reason or other. We went in 5-0 up at halftime, when really we should’ve scored 2 or 3 more tries, but for fumbles at vital moments.”

Do you think some of the refereeing decisions effectively sealed the result?

“It’s difficult to say really, but they certainly didn’t help matters. We had Alan Marsh binned just before half time, so we had 9 minutes of his binning running at the start of the second half, followed by two more yellow cards for Gavin Wood and Tom Eaton. So we had 30 minutes or so of the second half playing with 14 men, and that’s an almost impossible situation. You can’t blame the referee really, though he was a Welsh exchange ref and we just didn’t seem to be on the same wavelength as he was. Tom Eaton, who was captaining the side, just didn’t get on with him at all well.”

“Tynedale by contrast were really pumped up, probably buoyed by us losing men to yellow cards. They played very well in the second half, and we couldn’t respond. I don’t know why, but we just couldn’t get going at all. Because we were constantly working 1 man short, our heads seemed to go down when we went 14-5 behind. Our body language wasn’t good, and you could tell there was no way we were going to win the game. After that it was just a matter of playing the time out.”

So, are there lessons to learn from that display?

“Well, yes and no I suppose. It was a disappointing day all in all. Our attitude in the second half leaves a lot to be desired, and we’re going to have to address that. We’re going to need to work on clearing out rucks, and we’ll be doing that in training this week. We also need to work on individual skills. Little mistakes with technique and positioning can cost you: now when a number of players are making these mistakes all at the same time, then you’ll pay the price. It would be great if I could turn round and say, oh this was wrong or that was, and we’ll change this and that and everything will then be perfect again. But I can’t. It’s not that simple. I don’t know what went wrong, so it’s best to put it behind us and move on. All I can say is that when we’re good, we’re very good, but when we’re bad, we’re awful.”

Are you still optimistic about the rest of the season?

“We all have bad days at the office, and that was ours.  Despite the set back, we’ve still got a lot to look forward to- second in the league and playing well generally. Why wouldn’t we be looking forward? We’ve certainly got more to look forward to than Martin Johnson anyway. I’m surprised he didn’t jump in after Tuilagi. What we need to do now is concentrate on doing what we do best. Roll on Rosslyn Park. Let’s show them how well we can play.”

“For a large part, we play very well week in week out. Our style of play suits us, so it’s pointless to try and change things. It’s much better to work on what we already do best, and keep on improving on it. If you start to stray into areas you’re not familiar with, you loose that focus. So, we’ll carry on concentrating on doing what we do best and give Rosslyn Park a good game. They are a decent side and beat Tynedale recently away from home. They’ve been bolstered by borrowing some decent players from Harlequins, Wasps and Saracens, and are a tidy side – having said that, they haven’t won all their games.  If we can get our pack going and gain some quality ball, we’ve got the players who can use it. So I think we’ll fare pretty well against them.”