If you were to believe all you read in the press, you’d be forgiven for thinking that it was only through luck and two fortuitous Tom Eaton penalties that Macclesfield Blues managed to sneak a win down at Cambridge at the weekend. The reports concentrate on the 19 penalties conceded and the scrums turned over, rather than the 5 try display and all-round performance of a team that refused to wilt in the 30+degree heat. Needless to say, Geoff Wappett, Director of Rugby and Head Coach, watched a different match to the reporters. For him it was one of the stand-out performances of the season, and he’s got nothing but praise for his team and their efforts. Here he talks to Macclesfield Rugby about the game, the discipline, and the declining standards of refereeing in National Division One and looks forward to the weekend’s home game against Tynedale.

Was the game as close as the reports suggest? 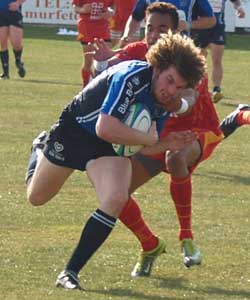 “No, I don’t believe it was. The score on Saturday doesn’t really do our game justice. It was one of the best performances of the season so far, make no mistake about it. Cambridge are a good side. They might’ve had a poor start, but they’ve been getting better each week. We had to play really well to beat them. The score doesn’t reflect the fact that it was 5 tries to 2: so I’m obviously pleased with that part.”

“If there was a problem it was that we gave away too many penalties. Their kicker, Tom Wheatcroft,  was on fire and just didn’t seem to miss. I think in the end he finished up with 22 points, and kept them in the game. There’s no doubt they were very strong, but I have to say we were fantastic. We started off at a blistering pace- 19 nil up after 12 minutes having scored 3 fantastic tries. We just played with a rhythm and an intensity that few sides could’ve coped with. The score might look close, but I’m satisfied that the quality of our performance was very high indeed, and I’m delighted by it. I should also add that it was unbelievably bloody hot – 30+ degrees: I know it was the same for both teams, but our lads coped with this extreme heat admirably.”

Is discipline really a problem? The Blues did concede 19 penalties after all.

“No I don’t think it is. I’m not sure how we finished up giving that many penalties we gave away. There were some very soft penalties given, and some even stranger refereeing decisions, but these things happen. I don’t think discipline’s a problem for the team, as we normally cope with referees pretty well. So, we’ll just have to take notice of this and adapt our game and play smarter. We need to stay on the right side of the referee, whatever side that might be, because it’s making games more difficult than they need to be.”

So what about the refereeing standards- are they satisfactory for this level of competition?

“At times, I’ll be frank I find the standard of refereeing and the lack of consistency unbelievable. Sometimes it’s so crass, it’s untrue. You’d expect at this level of rugby in National One, the referee would be as good a standard as the players. But I’ve found that’s not the case. Mind you, the same applies in the Premiership and the Championship too. Referees can be inconsistent, and what’s worse is that the touch judges don’t help the referee. I don’t know whether that’s the referee’s decision, but it seems stupid to me. They’re wired up with all the technology, but only one man makes the decision which to me is a little silly.”

“Why not use all the assets that are available? It’s just not good enough really. It wouldn’t be quite so bad if it was just issues about interpretation of the laws, but it‘s often the basic stuff that’s the problem. The referee on Saturday missed one or two fairly crucial decisions. Fortunately it didn’t cost us, but it could’ve done. This is a matter that the league needs to address, but I don’t know quite what they do about it.”

Did the set piece struggle as was suggested by some reports?

“I don’t believe so. I’m very happy with the way our set piece is functioning. I know we lost 3 of our scrummage balls on Saturday and one of our line outs, but that’s unusual. Our set piece has worked well this year, but we always work to improve things, particularly with Tynedale coming this weekend. We’ve certainly got the platform at the set piece: all our forwards need to strive for is a greater degree of concentration and a higher level of consistency. If we can cut out the momentary lapses of concentration, then we’ll be alright.”

What are your thoughts about the game against Tynedale?

“Tynedale lost to Cambridge the week before last at home, so that gives us a clue about what type of game plan to employ. Tynedale are a good side with pace who like to move the ball around. It’s the sort of game plan that can really frustrate teams, because if they don’t execute everything perfectly then there’ll be somebody with a foot or a hand in there to disrupt your patterns. They’re also not afraid to run the ball back at you either. If you look at it logically, you’d think with our form over the season and our confidence levels, we should be comfortable for a 4 or 5 point win. Still, when did sport and logic ever go together?”

“It’s a bit of a cliché I know, but it is really important to win your home games. What you want to do is make the experience as uncomfortable as possible for the opposition. You have to give them nothing – not even a sniff of a chance. If you can make your home ground a fortress and win all your games, then all you need to do is pick up a couple of wins on the road, and you’ll be challenging at the top for honours come the end of the season. That’s what we’re aiming for. We don’t want teams coming here thinking they’ve got a chance.”