Macclesfield director of rugby and head coach Geoff Wappett believes the fans must stick by his side despite seeing them slip to a fourth straight defeat against Fylde. 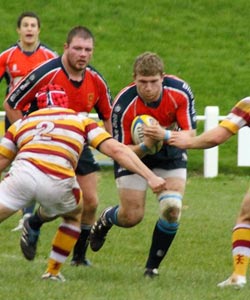 Wappett watched on as Blues lost 24-39 to the Lancashire club at Priory Park, in front of a crowd made up largely of Fylde fans.

He said “Were we playing at home or away today? They had more people here than we did, and that just can’t be happening.

“The run we are on is the first setback we’ve encountered during my tenure, and we will get back on the horse and come back from this.”

There were some positives for Blues as they earned an eighth try bonus point thanks to tries from Chris Roddy, Richard Hughes and the Mulchrone brothers Charlie and Fergus.

As has been the case for most of the season, Macc got off to a flyer scoring two tries in the first six minutes, Roddy taking advantage of some early pressure to drive through for the score, before Fergus Mulchrone broke numerous tackles to cross in the corner.

Tom Eaton was unable to convert either early on, leaving the lead at just 10 points, as Macc started to build pressure.

Fylde weren’t without chances of their own though, and after a couple of trips into Blues territory, were able to score through former Macc player, Evan Stewart.

Charlie Mulchrone, having received treatment for an injury before carrying on playing collected the ball at the back of a maul before he evaded three defenders to dive over the line, giving Eaton another opportunity at goal – one he didn’t squander.

Macc were reduced to 14, just before the break, Ryan Parkinson sent to the bin for a deliberate infringement at the breakdown.

A pair of penalties from the boot of Kenyon saw the margin reduced to just four points at the half, but Macc still in the ascendency.

Charlie Mulchrone was forced to leave the field just after the restart, unable to continue and was replaced at scrum half by Matt Simpson.

Aware of the impact the younger Mulchrone sibling was having on the game, Fylde seemed to be lifted by his absence and began to dictate the game through Kenyon’s boot; Macc often finding themselves pinned back in their own territory.

Paul Arnold’s try was the result of some prolonged pressure from Fylde and the Macc defences began to creak for the first time in the match.

Richard Hughes then scored brilliantly, after good build up play between Eaton and Tom Davenport, allowing Hughes to break a pair of tackles and run through under the posts.

As legs began to tire and the game entered its final ten minutes, Macc were made to pay, conceding three tries in the final part of the game to resign them to a fourth straight defeat.

Wappett said: “With as many players missing as we had we knew it would be an uphill struggle. The boys that came in did brilliantly considering how little national league experience they had.

“They had literally nothing left at the end, they gave their all and that’s all I can ask of them.”