Macclesfield conceded in the dying seconds of the match to lose 33-27 to Rosslyn Park and seal back-to-back home defeats for the first time this season. 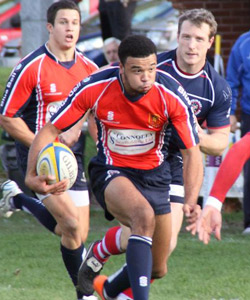 A Fergus Mulchrone brace and a score each from Ryan Parkinson and Mulchrone’s brother Charlie sealed a bonus point for the home side as they didn’t leave the match empty handed.

Having lost so disappointingly last time out, Blues were keen to bounce back, and started brilliantly; Tom Eaton dictating the early play with the boot.

Ross Winney, making his return to the first team, missed an early penalty which was to become a recurring theme of the match, though Macc continued to dominate.

Mulchrone got the first of his two scores after eight minutes, breaking the Park line before cutting inside on his right and powering through for a try.

He added his second ten minutes later, capitalising on good work from Parkinson and outside centre Jack Moorhouse to score well.

Winney was unable to convert either, leaving his side with a ten-point advantage after a quarter of the game.

Winney and his opposite number Ross Laidlaw exchanged penalties before Park hooker Dan Richmond bundled over the line to bring his side back into the match.

Another penalty from Laidlaw levelled the match at 13 apiece with seven minutes to go half-time, which was not enough for the travelling Park faithful.

Miles Mantella added his side’s second try of the match to ensure his side went into the break with a lead.

True testament to the reputation of Blues as a formidable force in this league became apparent just before the resumption of play – the visitors huddling round each other in the centre of the pitch, realising the effort that would be required to hold onto their slender lead.

Laidlaw was in action for Park soon after the break, extending his side’s lead to eight with his third penalty of the match.

Charlie Mulchrone added his seventh try of the campaign with a piece of individual brilliance to score in the corner.

Winney added the conversion to reduce the deficit to just a single point.

It wouldn’t stay that way for long though and just four minutes later, Mantella added his second and Park’s third to extend the lead to six after Laidlaw’s conversion missed the target.

The match was nip and tuck with neither side really dominating but Ryan Parkinson sealed his side’s bonus point with a breakaway try from a lineout in Park territory, with Winney adding a tough conversion to regain the lead for the home side.

Winney couldn’t build on that effort though and missed two penalty chances, which would have put the game to bed with less than ten minutes of the match remaining.

Blues had looked to hold on but deep into injury time, Chris Lewis shook off some tired tackles to touch down in the corner – leaving the Macc players devastated and the Priory Park faithful in a state of shock.

Macc stay second in the league despite the defeat, thanks to a try and losing bonus point respectively.

The home side will look to end a run of two straight defeats when they make the trip south to Coventry.