The curse of the red shirt continued for Macclesfield as they went down 21-17 to Birmingham and Solihull Bees in a rare Sunday fixture to make it five games without a win. 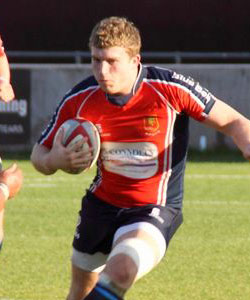 Blues have been forced to wear their alternate red strip because of printing issues, and have remained winless since the switch at home to Tynedale on 8th October.

Macc knew the game wasn’t going to be easy as despite the home side’s position of rock-bottom in the league, Bees were plying their trade in the championship last season.

With notable absentees including Charlie Mulchrone and Ross Winney, the Blues back line suffered a re-shuffle which saw skipper Tom Eaton move from fly half to half back, Fergus Mulchrone from full back to replace Eaton and Ed Stobart moving from 11 to 15.

The match was a slow burner in the first ten minutes, with just a pair of Bees penalty chances to speak of, one scored and the other missed by fly half Dan Hawkes.

Macc then sparked into life, Stobart running from deep to finish a wide attacking move from the visitors.

Eaton was unable to add the conversion but when Jon Lowden was sin binned for an infringement at the breakdown, Macc had an advantage both on the field and on the scoreboard.

The reduction to 14 seemed to galvanise the Bees though, almost scoring a breakaway try but for some good clearing up by Stobart.

Neither team could hold the lead as a second Hawkes penalty regained the advantage for the West Midlanders, before Josh Fowles scored the first of his two tries after good work at the line-out to tip the balance once more.

Macc could have extended their lead even further but had a lineout stolen on their opponent’s five metre line.

The missed opportunity would cost them though as Alex White kicked through and finished well for Bees.

The conversion from Hawkes meant Macc trailed by three points into the break, but not before Fowles was sin-binned for an infringement similar to that of Lowden.

Unlike Macc, Bees were able to make the most of their man advantage, scoring just three minutes after the restart; Mitch Todd scoring after his side pressed the Macc line.

With a lead of eight points, Bees started to exert some pressure and found themselves camped in the visitors half.

Fowles returned to the fray but the fortunes of his side didn’t improve, Hawkes adding a drop-goal to take his personal tally to 11 points.

With the game hanging in the balance, Fowles scored his second try after good combination work from Jack Moorehouse and Fergus Mulchrone.

Eaton added the conversion superbly from the edge of the pitch to give his side a sniff.

Bees had a man sent off in the 67th minute when Russell Earnshaw was dismissed for an apparent stamp at the breakdown.

Alan Marsh had a try that would have given Blues both the lead and the bonus point cruelly disallowed after he was adjudged to have knocked on as he reached for the line, when photographic evidence from the crowd suggested otherwise.

Birmingham held on for a much needed win as they look to avoid relegation; while Macc will be left rueing missed opportunities and bemoaning unfortunate injuries.

Macc return to Priory Park on Saturday where they host Blackheath.