Another nail biter at Priory Park but at the end of the game it has to be said that Jersey – possibly the best side I have seen visiting Macclesfield so far this season – just about deserved the spoils but the home side can consider themselves unlucky not to come away with anything from a wind affected game in which they gave their all and but for some stoic Jersey defence they surely must have scored more points. 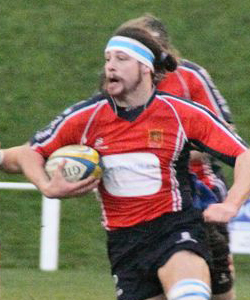 Jersey, who have the best defensive record in National One, took all that Macclesfield could throw at them and spent probably 80% of the second half defending their line but questions were being asked by some of our older supporters (forwards in their playing time) about just how the front rows were being refereed and the general view was that Jersey ‘got away with it’. Enough said and now onwards to Cinderford on Saturday as the campaign reaches the half-way stage with the Blues presently on 50% with Won 7 Lost 7 and still nicely placed at 8th in the table.

Around SSE National One there were the usual ups and downs with Ealing surprisingly going down to successive defeats, this time at the hands of the ever improving Coventry side, 29-28 here so it couldn’t have been closer. Stourbridge won at Barking in the basement battle 18-13, Bees at home to Rosslyn Park were swamped 59-12, Sedgley Park (record identical now to the Blues) won at Blaydon 27-15 to set up an interesting encounter just before Xmas with us at Park Lane, Wharfedale won at Cambridge 31-17 with the home side currently going through a rough period, Fylde overcame Blackheath 28-22 at the Woodlands and Cinderford who we meet on Saturday lost at Tynedale 24-0 all of which leaves Ealing still top but with the margins narrowing with Fylde, Rosslyn Park, Jersey & Coventry well in the chasing pack with others including the Blues in contention.

Around Priory Park for the lower sides it was cup Saturday and the Lions – seeking to retain the Raging Bull Cup – travelled up to Carlisle with a much changed squad and just came out winners by 17-12 to earn a home tie in the next round on 21 January against Kendal Two’s.

The Thirds lost out to Wirral seconds by 29-7 and the Fourths won by default when Ashton on Mersey cried off.  They play Stockport Fifths at Bramhall in round two also on 21 January next.

Meanwhile the Vets had a close call at Leek ending that one with a unusual 5-5 draw.

Nice to meet some former colleagues at the game on Saturday which was sponsored by Greentech Ground maintenance and those in their party I am sure enjoyed the afternoon despite the result.

Before the game I was privileged to be a guest to receive the Jersey Committee and at the table, crutches & pins to boot an’ all  was Chris Jones who I am delighted to say was in good order along with Kate and he appears to be coping excellently with his injury that occurred at Ealing the previous Saturday.  Chris has an excellent attitude to this latest setback and I am sure he will make a full and complete recovery.  It is good to see the support that he has already had from the Rugby Community both here and in Ealing.  I would expect nothing less from this great game of ours.

Still much fallout from the World Cup and plenty in the national media to mull upon until it is all sorted but quite the best anecdote I have read recently was the fact that Mathew Vaea, Manager of Samoa, was fined 100 sows for bad behavior during the competition. No further comment needed!!

Nearer home though history was made at HQ yesterday when Sam Tomkins played – and scored their only try – for the Barbarians against Australia.

With all the conjecture that is currently the RFU I sometimes wonder if that famous day back in the late 1890’s will be repeated at the George Hotel, Huddersfield………….

Don’t forget the next home game on 10 December v. Stourbridge will host a pre match dinner – tickets I believe are still available – and on this date in the Presidents Lounge is the Annual Stags Xmas Extravaganza when I hope to chew over old times with many former playing colleagues and celebrate our first ‘double’ of the season.

Before I close this column I have to say with some sadness that, after 24 years, and for deep personal reasons this will be the last column I will be putting together for the club and I wish whosoever takes it over all success together with the enjoyment I have had in producing it along with the match programme notes over that time.  I can now concentrate on finishing my Cricket career!!

My first ever programme notes were for a Courage league game on 17 October 1987 when Macclesfield entertained Cockermouth.

The Macclesfield side that day was: