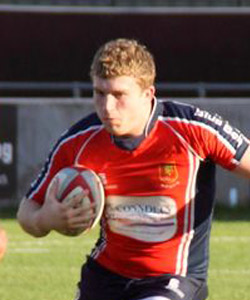 Jones suffered a broken leg towards the end of the first half which led the match being delayed for over half an hour.

Coach Geoff Wappett said “It was an unfortunate injury and we wish Chris all the best. He is such good player and has been in great form of late, so will be a massive loss for us.”

Ealing have been impressive since being promoted to National League One at the end of last season and Macc knew it would be a tall ask to get anything out of the fixture as the West London side boasted two of the league’s highest try scorers.

Tries from Josh Fowles, Sam Moss and a hat-trick from Ryan Parkinson saw Blues pick up the bonus point and inflict Ealing’s first home defeat of the season, and only their second in total.

Macc got off to a brilliant start, taking the game to the hosts which created a fast-flowing open contest, much to the delight of the travelling faithful.

Blues opened the scoring in the first minute through Fowles; the winger burst down the flank before faking a pass inside and running through for the try.

Trailfinders looked dangerous with the ball in the backs, but it was to be the forwards that made the first impact on the scoreboard, driving the ball through Macc territory to bundle over the line with Karl Gibson credited the score.

Blues then had a chance to regain the lead after Ed Stobart hacked the ball through and would have touched down in goal, only to be held back an opposition player.

The visitors felt hard done by, especially as the incident led to a penalty but no further action for the player.

Parkinson scored the first of his three scores, following their opponent’s example and scoring through a rolling maul.

Eaton couldn’t add the conversion but Macc had the lead once more.

The match was turning into a shoot-out and Ealing responded once again through Sam Wardingley, the home side showing the attacking threat by running the ball wide and leaving the Blues defence stretched and exposed.

Then the match took a turn for the worse, Chris Jones running with the ball before being tackled and falling awkwardly; breaking his leg in the process.

The game was then delayed for a long period while the medics attended to the number eight, which lead to referee Andrew Jackson calling the half time interval early.

Phil Chesters and Ryan Parkinson exchanged tries as the Macc lead by a point at half time.

After a two minute break the second half was started and Sam Moss bundled the ball over the try line to extend the visitors lead and seal their bonus point.

Eaton and Ben Ward scored a penalty a piece to leave the difference at six entering the last ten minutes, but Parkinson completed the hat-trick late on to seal a deserved win for Blues and a second win in a row.

Parkinson said: “It was a great team performance, the lads got in great positions and I was just in the right place at the right time. Every player on the pitch deserved credit today.”

Macc host Jersey on Saturday as they look to make it three wins in a row.