It wasn’t the result any supporter wanted or predicted, but you have to accept that Macclesfield Blues just couldn’t quite pull off the win against local rivals Fylde Rugby at the weekend. It looked good for 70 minutes, but then a 10 minute blitz by the visiting side saw Macclesfield Rugby concede 3 tries to ultimately lose the match. That’s four defeats on the bounce now, and there’s some concern that the blues have got themselves into a bit of a rut. Geoff Wappett though, sees matters differently. The Director of Rugby and Head Coach isn’t focusing on the negatives: on the contrary he sees the current predicament as a challenge. Macclesfield Rugby Club has experienced nothing but success for the previous four seasons. Everything has gone swimmingly. However, the Club, the coaches, the players and the supporters are now in completely uncharted territory. Things aren’t going to plan, and the real challenge now lies in how they respond to these problems. Do they panic, or do they just pull up their socks and get through it together? 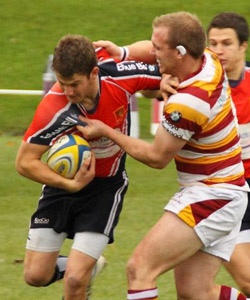 How demoralising was Saturday’s result?

“The weekend’s result was a real disappointment. I still can’t believe it really. We worked so hard and in fairness did enough to earn a win. For 70 minutes we were good value for our 24 -20 lead, then they scored 3 tries in 10 minutes and it just unfolded. You just can’t give any side those sorts of chances, especially good sides like Fylde. I feel really sorry for the lads because they gave it everything they had, but it just wasn’t enough in the end.”

“Charlie Mulchrone going off injured was a big, big loss. Losing your scrum half disrupts everything you’d planned to do, but losing a player of Charlie’s quality would hurt any team seriously. The scrum half is the fulcrum of the team, and everything goes through him. We also had to shift the personnel around before the game too, and that disrupted our plans. I’m not trying to use those things as an excuse, but we were playing shorn of several senior players and that affected our game.”

“Having said that the young guys who came in played really well and did themselves great credit. Chris Roddy in particular showed up well. Considering it was his debut performance, he had an outstanding game. It wasn’t only his try after 2 minutes, but his overall game that pleased me. The thing is we’re playing in a good league with high quality teams and scoring every game, but at the moment we’re just not playing quite well enough. I’ve mentioned it before when we’ve spoken, but the margins are so tight in this league: sometimes the results go for you, and sometimes they don’t. At the moment we’re on the wrong side of the margins.”

How’s the squad bearing up?

“Injuries and absentees can determine the outcome of games, and it’s important that the fans remember that. We’re not in a position to be able to carry a real top notch squad with ready-made replacements in case of injuries. If you’re a really good player, you won’t be waiting around for your opportunity should someone get injured: you’ll be off to another team where you’ll get automatic game time every match.  That’s especially true for key positions like half backs.”

“We also can’t guarantee to have every player available for each match, and that’s a real problem. These guys have to earn a living as well: that’s rightly their number one priority. Hopefully some of these boys will be available for this weekend’s match. Ross Winney’s been away with work commitments and Simpson’s isn’t available this weekend and so it goes on. When things aren’t going exactly to plan, you find that these things make all the difference. When things are going right for you, you generally get no injuries and everyone is available. It’s just sod’s law. There’s nothing fundamentally wrong with what we’re doing, well nothing a good result wouldn’t put right. ”

How do you see the game against Birmingham going?

“Saturday’s game will be difficult, but I think we can win it. Don’t forget Charlie’s injured and Simpson isn’t available, so we’ll have to patch up as best we can. We’ll have to play Ross Winney at scrum half and Fergus Mulchrone at fly half I guess. Birmingham are a good side, but have had a few problems. Because they’ve come down from the Championship they’ve lost a number of their quality players. That has to have an impact on the team. In many ways they’re like a new side. We just have to ignore all that and see if we can put a result together. If we play as well as we have been playing, hopefully we’ll get something out of the game.”

Have you got any message for the supporters?

“I suppose what makes this run of defeats particularly difficult for the Macclesfield supporter is that this thing is new to them. They’re not used to losing. This is our fourth season, and in truth, this is the first real setback we’ve suffered. That’s what I’ve been telling the players. Everything couldn’t really have gone any smoother. Now, however, we’ll start to see what people are really made of: the supporters, the players, the Club committee, the management. You only really see people’s true colours when things aren’t going to plan. We can’t afford to panic: we just have to keep on supporting each other at every level and remain positive.”