Considering this was the fifth consecutive loss on the bounce, you’d be forgiven for thinking that the mood in the Macclesfield Rugby camp would be at rock bottom, and that Head Coach and Director of Rugby, Geoff Wappett, would be pulling his hair out. You’d be wrong though. Of course the team are disappointed with the run of results, and are aware that they could have achieved so much more, but there’s an inner steel running throughout the camp. Macclesfield Blues are going through a bad patch, but they know that form is only temporary. The class they have as a team will shine through eventually, and when it does other team’s need to watch out. This week Geoff talks to Macclesfield Rugby about confidence, belief and the fact that there is undoubtedly a silver lining to the current cloud. Macclesfield Blues may be down at the moment, but they’re definitely not out. 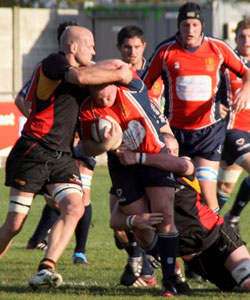 So, another bad day at the office then: are you and the team disappointed and down after the loss at the weekend?

“Yes, we’re disappointed, but I’m not thinking of topping myself just yet. I’ve mentioned before that the margins are tight in this league: any team is capable of beating the others on its day. Even when you play your strongest squad you could be up against it, but if you factor in a few absentees and injuries in there, then it’s almost inevitable that you’re going to get some set backs. That’s what’s happening to us at the moment. If you can’t play the team you’d like for whatever reason, then the chances of winning are reduced. Yet, even though we’re missing quite a few players, we’re still only losing by a small margin and still scoring tries. That’s got to be hopeful.”

So what was the problem on Sunday? Tell me it wasn’t the red shirt?

“No, it wasn’t that. In fairness we didn’t play very well on Sunday. It was disappointing. But we still scored 3 tries to their 2. The problem we’ve got is that Tom Eaton’s not kicking his goals at the moment, and we don’t have an alternative. Birmingham managed to kick most of theirs and that was the difference. We scored the third try with about 12 minutes to go and we were energised. If we’d played like that for any sustained period of time, we’d have won the game hands down. The difference was that in that last 10 minutes we put some pace on the game. It’s a shame we couldn’t do that earlier. ”

What can you take out of the game and the rest of the season so far?

“Confidence is obviously a little bit low at the moment, but the lads aren’t too downhearted. It was inevitable that we were going to struggle: Fergus was playing at fly half, and he’s not done that since he was at school, and Tom had to go back to scrum half. Obviously we tried to adapt, but with such a wholesale change in the half backs, we were always going to struggle. Consequently we looked a bit rusty, and there were breakdowns where we wouldn’t normally expect them to happen. So, all in all: disappointing, but hardly unexpected.”

“What we need to concentrate on is the positives. When we play with pace and energy, we’re a match for any side. The Fylde performance gave me great heart: for 70 minutes we looked great, playing with pace and passion and executing all our opportunities. We looked a bit like that for the last 10 minutes on Sunday. What we’ve got to do is rediscover that form. So, we’ve stripped things down and gone back to basics to find this form again. Now what we have to do is put it all back together again. I spoke to the lads shortly after the game, and although they were disappointed, they certainly weren’t downhearted. We’ve got 4 more games to go until we’ve played everybody in the league, and to be honest, we’re not frightened of anybody. We haven’t seen anything that worries us, and we certainly haven’t been outclassed by any of the sides we’ve played. Yes Blackheath are a good side, and we’ll be well prepared for the weekend.  We know if the circumstances are right, then we’ve got the game to beat them. We’re still scoring tries, and when we use the ball with pace we look really good.”

So what are these positive qualities you’ve seen?

“When we’re able to put pace on a game, we seem to be able to score at ease. We keep putting ourselves in positions to score, so I’m satisfied with that and see that as a definite positive. We’re also getting better at looking after the ball, and tidying up around the ruck. Alright the set pieces are letting us down at times, but because we’re constantly having to change personnel, it’s not that surprising. All we have to do is work hard, circle the wagons and put our collective shoulders to the wheel. The lads are up for it, and we’re sure the supporters are too. It’s like I said last week, you only see the true mettle of people when they’re up against it. We’ve had our setbacks, and we’d forgotten what these were like. It’s up to us now to get the machine turning again and start playing in the way we know we can. We’ve certainly got the players; all we need now is the rub of the green.”