It proved to be a step too far for the Blues at Priory Park last Saturday. They played well enough and competed right to the end, but unfortunately just came up short. Still, given Jersey’s strength in depth and experience that was no disgrace. The Islanders can boast top-level experience right across the park, with two former Sale Sharks, an ex-Leeds Carnegie player and a former Cardiff lock and England Saxon amongst their number. They’ve played consistently well throughout the season and have given most sides a bit of a seeing to. So, all in all, it wasn’t such a bad day at the office. Macclesfield’s Director of Rugby and Head Coach, Geoff Wappett, was reasonably pleased with the performance, though can’t help but envy the resources that clubs like Jersey have at their disposal. If only all clubs were in the same position, the league might look altogether different. Still, money can’t always buy success. Here Geoff talks to Macclesfield Rugby about cash, confidence and consistency. 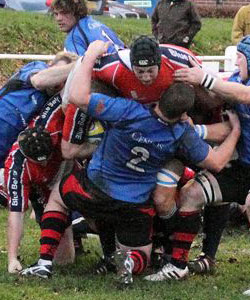 Did you come away from that match feeling disappointed disheartened?

“Yes it was a disappointing result, though I wasn’t disheartened. Let’s face it, Jersey are a really good team. We gave away 2 soft tries early on, and just didn’t have enough to recover. Mind you, apart from those 2 tries I think everything else was pretty much even-Stevens. But I’m still disappointed on two fronts. At 17 -15 we were dominating possession. I reckon we must’ve had 75 -80 percent of the play, we had good territory and got into some good field positions, but just couldn’t manage to convert the opportunities. So it was disappointing not to score, but it was even more disappointing to let them in for a score with 2 or 3 minutes to go. I just didn’t see that coming: if any team was more likely to score it was us – or so I thought. Because of that lapse in concentration we finished up pointless, and that’s a pity because our performance merited more than that.”

Where there any positives you could take out of the game?

“Well, yes there were. The positive I take from the game was that we played pretty well over all, given the circumstances. Obviously we’re not as effective going forward as we have been, but that’s particularly a problem at scrum half. We’re definitely missing Charlie Mulchrone. Don’t get me wrong, Simo’s doing a good job, especially considering he’s only been playing there for 3 games now: it takes years to get to know a position inside out. The problem is that we’re not able to manage the game as well as we might have done. We had opportunities to strike, but our half back combination didn’t quite click on the day.”

What did you think of Jersey?

“Our line out wasn’t too good, but that’d down to Jersey disrupting what we normally do well. When we got the ball we moved it well, finding holes in Jersey’s defence and creating chances. But I have to be fair to Jersey. They defended extremely well, and have a cracking defence all over the field. There’s no doubt in my mind that they’re clearly the best side we’ve played this season. It helps obviously that they can constantly add players to their squad, which would put them at an advantage, but I wouldn’t use that as any sort of excuse.”

“Take someone like Jim Brownrigg who played in their second row on Saturday. He’s massively experienced and has played for Cardiff and for Bristol I think and the Saxons. Alright he might be 34 but he’s fit, and a real good player in either the back or second row. He was absolutely tremendous, and single-handedly ruined our line out just through intuition and skill. When you can call on experience like that it will obviously put you at an advantage. If that wasn’t bad enough they then went and brought on a big Welsh prop, Ben Evans, a former Sale Sharks and Wales international. They’ve just got experience and nouse all through the squad: McCormack, the scrum half, was an ex-Lancashire captain and played for Otley and Leeds Tykes, and he, too, had an outstanding game. Mind you, if you’ve got a big enough cheque book, then you’ll tend to attract the better players. It always boils down to money in the end, doesn’t it?”

So, overall the performance was more important than the result in your eyes then?

“Yes I think so. We played pretty well and competed against an outstanding side for most of the game. In fact at times I thought we outperformed Jersey, so I’ve got to be satisfied.  If we can continue to show the form we’ve shown over the last 2 or 3 weeks, then I think we’ll do ok for the rest of the season. We’re now going to play some sides who, let’s say, are lower down the food chain. If we can perform with the same intensity as we did on Saturday, then we should be able to pick up some points.”

What about Cinderford: what are you expecting from them?

“Cinderford had a torrid time up at Tynedale at the weekend and were nilled, so that can’t have done their confidence any good. Mind you it’s a long old journey up from Gloucestershire to the North East, and you can’t really be sure whether they took their strongest team up there. Anyway, they’re normally a handful at home and very physical. When we last played them down there, they came out firing and in truth beat us up for the first 40 minutes. Eventually we got into our stride and scored a few tries. But I think that points to what we can expect at the weekend.  They’ve got a good strong pack, and a bit of experience and guile playing behind that with players like Rory Teague, whose  a really good kicking fly half who knows how to play for territory. He’s played in France and Italy and knows his way around the park, so I’m expecting a tough day at the office. Hopefully we’ll be able to come away with the points though.”