It may have been Tuesday when Macclesfield Rugby spoke to Head Coach and Director of Rugby, Geoff Wappett, but you could almost sense that the smile was still beaming across his face. He’d be justified too: Saturday’s win over Blackheath at Priory Park, marked a turning point for the team. It wasn’t simply a matter of getting a win after 5 consecutives losses on the bounce; it was about exorcising a few demons and putting in a complete performance. What Macclesfield Blues were sorely missing was confidence. Questions had been asked of the team and the management, and they duly delivered the answers – emphatically. It’s worth remembering that this win wasn’t against any ordinary team: Blackheath were, and still are, a form side who’d won 7 games on the trot and were brimming with confidence. That only makes the performance all the more remarkable. Never the less, being a pragmatic and level-headed sort of chap, Geoff isn’t getting carried away: yes they can celebrate the win, but come Sunday morning it was back down to business, planning for next weekend’s game down at Ealing. So, how satisfying was that performance, can the team maintain this new rediscovered level of confidence and what’s the squad availability for the next away trip like?  Geoff Wappett has all the answers. 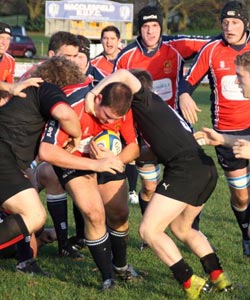 What positives did you draw from the Blackheath game other than 4 points and a win?

“It was a wonderful result and well deserved. Everything went according to plan. It just goes to show that if you’re patient, then the results will come. There are lots of positives to take out of the game, but the one that stands out for me is confidence. I’ve never seen our changing room look as bright and positive since Twickenham. Their smiling faces were a picture, and I don’t just put that down to relief, though obviously that played its part. They just looked satisfied that they’d done a job and put in a complete performance. It just proves what I’ve been saying all along. You might win on a regular basis, but sometimes you’re in danger of starting to take this for granted. It’s only when you’ve been down like we have, and turn it around, that you truly start to appreciate it. Then the winning feeling is fantastic: it really is priceless. There’s no doubt about it: to get a buzz and a real high, you have to experience the real lows. That’s why it means so much. On Saturday there was a fantastic buzz from everybody in the Clubhouse.  That’s the real positive for me. We all wanted it to happen, and when it did happen you could almost taste the renewed sense of belief.”

So where does the team go from here? Is it simply a question of building on this momentum and playing in exactly the same fashion, or will the game strategies be determined by the team you’re playing?

“Ideally you’d like to build on this and keep the momentum going, but to be honest to then have to play away at the top of the table side who’ve only lost once this season, is as big an ask as you could ever get. It really couldn’t be more difficult than the test we’ll face with Ealing, not to mention Jersey. But we do play well when there’s a bit of a fear factor. When you’re playing a good team, it brings the best out of you. We’ll approach the Ealing game with the same sort of attitude and belief as we’ve done with other top games.”

“Where we’ve struggled in the past, is in not playing for the full 80 minutes. We were fantastic against Fylde for 70 minutes, and then let it slip: it was the same against Cambridge. But we overcame that last Saturday. We wanted to improve our tackling and defence and have worked hard on that, and I’m glad to say the hard work paid off for us. We conceded fewer points than we’ve conceded all season, and looked like a force to be reckoned with.  And don’t forget that was against a team that was full of confidence and who’ve won 7 games on the bounce. The next 2 games will be difficult no doubt, but I’ve got a bit of a positive feel now we’ve got the monkey off our back.”

What’s the position with squad availability for the Ealing game?

“Well, another positive for the Ealing game is that both Ross and Fergus are back. Ross is available for the next few games, and Fergus is available for Saturday. Matt O’Regan’s calf strain is improving, so we might even have him available too. So all of a sudden the problems are beginning to dissipate. We won’t have Charlie Mulchrone back for some time though. Logic tells you he’s at least another month away, given the nature of his injury. What we won’t do is rush him back and play him when he’s not fully recovered. He’s a fantastic player and we miss his ability, but we want him back when he’s fit and ready, and will be able to stay fit. Sadly I wouldn’t be at all surprised if he doesn’t play this side of Christmas.”

So what’s the plan for Ealing then?

“Ealing are a good all-round side, but they’ve also got two quality wingers, Chesters and Bruynseels. They’ve got blistering pace and tremendous scoring potential. I think between then they scored 45 tries last season, and have got a large proportion of their points this year too. Somehow we’ve got to tame these two. Saying that, if they’re stuck out on the wings, it’s our job to make sure the ball doesn’t get to them. What we have to do is dominate the ball in the forwards and maintain our defence right across the field right up to their goal line: they’ve got such pace that they’ll have a go at you from anywhere on the park. I’m confident after Saturday’s performance as our forwards and defence were particularly effective. We’ll be going there with the attitude that if we can achieve this defensive dominance, then we’re certainly in with more than a shout. We defended stoutly for most of the matches against Fylde and Cambridge, so if we can concentrate for the full 80 minutes we’ll hopefully do quite well.”