It certainly was a close one against Stourbridge but a win is a win and that is what matters surely? 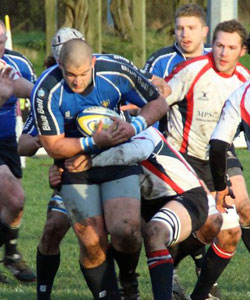 Credit to the opposition, they have had a tough season so far, winning only four times, but came to Priory Park without the fear that a potential relegation can bring to a team.

I am sure that if they continue to play that expansive style in the second half of the season, they have every chance of securing their league survival, despite not being on the right side of the result on this occasion.

Our lads deserve some plaudits as well, who worked hard and put in the effort late on to make sure the result went our way and though it wasn’t pretty at times, it sure is effective and helped us to a ninth win of the season.

One of the biggest positives from the match was of course the return of Charlie Mulchrone to the ranks after being absent through injury since the end of October.

Charlie is a player with true skill and quality and will surely bolster the squad as they move into the second half of the season.

It must also be nice for Charlie himself, who will have been very frustrated to not be able to play in recent weeks, especially when the rugby has been going against us.

Can I also congratulate my predecessor Patrick Giffney in being offered a job by the Rugby Players’ Association.

Patrick has done a great job with Macc and left the earlier in the season after being offered an internship at the RPA.

He must have made a fantastic impression as they have since offered him a permanent role and I am sure I speak for everyone involved at the club when I wish Patrick the best of luck in London and I am sure he will do us all proud.

Looking ahead to next week then and to the game against Sedgley Park, it would be great to get as many of the Priory Park faithful up to Manchester to support the Blues.

One last push before Christmas and we can use the break to get everyone fit and raring to start again on the 7th January.

The league once again threw up some surprising results, with nothing separating Blackheath and table-topping Ealing, while Cambridge’s slide continued when they were edged out by Blaydon.

With 16 games of the season gone, it is great to see that the league is really open and the sentiment that anyone can beat anyone is so so true.

Elsewhere at the club, it was unfortunate to see the seconds winning run ended away at Stockport for a first defeat in nine matches.

I’m certain they’ll bounce back when they welcome Fylde to Priory Park, and go into the Christmas break on a high note.

Let’s hope for a full set of great results for our sides, which will make the festive season all the sweeter!