A revived second half performance from Blues saw them seal a 22-8 win over bitter rivals Sedgley Park at Park Lane. 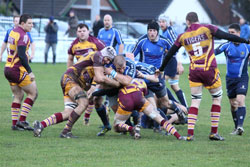 Fly half Ross Winney was the hero for a second week running, scoring 17 of his side’s points, and missing just one attempt at goal in the match.

Centre Tom Davenport crossed the line for Macc’s only try as they cemented their league position of fifth in National One.

In torrid conditions, the game got off to a frenetic start, both sides opting to test their respective full backs under the high ball.

Macc raced to a 6-0 lead after 11 minutes; Winney slotting two well struck penalties, as his side seemed to settle the quicker.

Park halved the deficit five minutes later though with a penalty of their own through Greg Smith as the home side tried to contain the attacking threat posed by Blues.

They took a surprising lead shortly after, Jamie Harrison running down the line to score, though Winney looked like he was obstructed in defence.

The lead didn’t last long though, and Winney’s third successful penalty of the half gave  his side a slender one point advantage going into the break.

With the game on a knife-edge, a quick start to the second half was crucial for either team, but Blues responded the better, Frankie Barker making a storming run, breaking two tackles to offload to Davenport who finished the move well.

Winney added the extras to put a bit of daylight between the two sides. 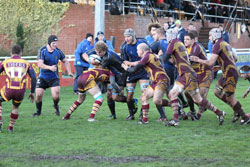 The game seemed to then reach a stalemate as neither side wanted to relinquish territory in what was rapidly becoming a quagmire of a pitch.

Macc were struggling at the set piece, but the introduction of experienced prop Gavin Woods tipped the balance back in the visitors favour, as he put on a scrummaging masterclass to keep Park at bay.

The home side almost found a response after stand in scrum half Tom Eaton’s box kick was charged down, only for the on rushing opponents to be adjudged offside.

Winney had two more attempts at goal, landing one but missing the other narrowly as the lead continued to grow for Macc.

Tempers were fraying as the atmosphere cranked up a notch, but it was taken too far when Winney seemingly found himself getting kneed in the head a Sedgley player.

The touch judge alerted the referee who was unsighted, and though a penalty was given, no further action was taking much to the dismay of the travelling fans.

Winney regained his composure to slot his fifth penalty of the match to put the result beyond doubt as his side saw the remaining minutes out to seal a third straight win and fifth in six matches.

Director of Rugby and Head Coach Geoff Wappett said: “Our first half performance was disappointing.

“We looked disinterested at times and were sloppy with ball in hand, but our response after the break was fantastic.

“The conditions were horrendous and we did our best in the circumstances.”

Blues now have a three week break before they host Blaydon on the 7th January.