So that makes it 6 wins out of 7 for Macclesfield Blues, with the only blemish being the home defeat at Priory Park by Jersey. It was a good performance against Stourbridge, and the victory was won by grit and determination, rather than a moment of free-flowing rugby brilliance, but you can probably blame the weather for that. It was wet and windy, so it didn’t really lend itself to quick hands and slick and skilful passing. Still Head Coach and Director of Rugby, Geoff Wappett, has always said he wanted to make Priory Park a fortress. We guess he’s got his wish. Not many teams will want to travel up the M6 knowing what might await them, so perhaps the battle’s already half won. Macclesfield Rugby caught up with Geoff this week as he reflected on the Stourbridge game. Here Geoff talks about grit, grim weather and grunt and looks forward to the weekend’s eagerly anticipated game with local rivals Sedgley Park. 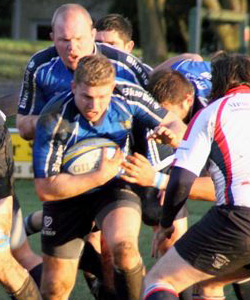 So that was a good four point win for the Blues then – are things going according to plan?

“Things are going pretty well at the moment which makes life easier doesn’t it? It was a good result to be honest. Yes, you can always look back at a game later and say well we could’ve done this, or we should’ve done that, but that’s pretty pointless really. It was a tough game ad we were made to earn our victory. Stourbridge were a tough nut to crack. They’ve been having a difficult time and have had to purchase a few new players. That’s stiffened things up a lot, and they proved to be a real handful. So whilst we won, I’d have to say it didn’t come easy. We had to work hard for the points. So, taking all those factors into account, I was pleased that we got the win, even if it wasn’t 5 points.”

What positives do you take from the game, other than the four point?

“What pleased me most about the performance was that we just stuck at it and persevered. It was a difficult sort of day: it was wet, cold, miserable and blowing a gale, and underfoot conditions were difficult. So what would normally be a routine passing movement, turned into something far more difficult. So we had to adapt our game accordingly. The conditions made the task difficult, but like I said we stuck at it, and as a coach that’s all you can ask of the players. Even when Stourbridge came back with a late try taking the score to 22 -19, we had the composure to close the game down and look after the ball.”

What do you make of Stourbridge – their performance didn’t really reflect their current league position, did it?

“Stourbridge have brought in 3 or 4 new players and bolstered their front five with the result that they’ve won their last two games. Even the games they’ve lost were only narrow defeats. One of their players told me they’d lost four of those games by just a single point. So although supporters may have thought the game should’ve been a formality because Stourbridge are down the bottom of the table, they maybe didn’t appreciate what a good side they were. Had things gone differently, and had they had a little bit of luck along the way, their league position would’ve been much higher. They’re currently third from bottom, but maybe that league position isn’t really a true reflection of their ability. Mark my words, Stourbridge are a good side. If they continue to play the way they did on Saturday, then they should move up the league before long.”

Next up Sedgley Park – any thoughts?

“Sedgley are coming to the game on the back of a hiding. They got badly beaten up and conceded 9 tries at Tynedale. That suggests to me that they’ve maybe had one or two injuries. Now whether those injuries will still persist for the weekend, we don’t know.  I know if that had happened to us, we’d be looking to circle the wagons and put on a performance in our next home game. I suspect if they have all their players available, that’s what Sedgley will do. They’ll show their fans that what happened wasn’t a Sedgley Park performance and certainly wasn’t an accurate reflection of their capabilities. Any side with a backbone will come out fighting after a heavy defeat, and I’m sure Sedgley have a backbone. So we might feel the reaction. Psychologically and mentally they’ll be tuned up for this, and that will just make it harder for us.”

What shape are the Blues in going into this local derby match?

“We’re in good shape by and large. Charlie Mulchrone made his long-awaited comeback appearance late in the second half and came through unscathed. We were able to select our side for last Saturday from a position of strength, although we did miss Alan Marsh. Marshy’s a hard old brute who likes to put himself about. So we missed his physicality, but young Chris Roddy stepped up to the mark and put in a fine performance. I suspect Marshy won’t be available for the weekend, but Fergus Mulchrone will be, so that’s a positive. We should be able to pick from a strong squad, and therefore I’d expect us to do reasonably well. We were really disappointing when we played Sedgley at the end of last season – in fact it was one of the worst games we’ve played since I’ve been here. What we don’t want is another repeat of that. We’ll definitely be looking to put the record straight there.”