Matt Owen went from zero to hero as he returned from a sin bin to score the winning try to beat Blaydon 16-10. 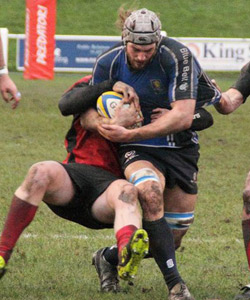 With a strong gale blowing straight down the pitch, both sides found it hard to judge distance and subsequently saw many kicks go straight out on the full.

Neither side dominated early on and after 10 minutes, Winney used a penalty advantage opportunity to slot a well struck drop goal effort to open the scoring.

Going behind seemed to wake the visitors up and they began to play with added urgency to their game, looking particularly dangerous at the break down, rucking well to produce some quality fast ball.

Blaydon could have gone ahead when an overlap emerged on the left hand side, only for Richard Hughes to make a brilliant saving tackle.

The side from the North-East began to turn the screw and used the maul to good effect and Owen was sent to the sideline for ten minutes as he tried to stop the moving ball illegally.

Blaydon took the lead shortly after as they continued to dominate with the forwards allowing Ben Morris to touch down next to the posts.

Macc responded almost immediately through a Winney penalty before Charlie Mulchrone on his return from injury broke the line skilfully before offloading for Parkinson to score in the corner.

Winney was unable to add the extras as his side went into the break with a slender four point lead.

The visitors could have reduced the deficit to single point but Andrew Baggett was unable to find his range.

Blues were back to their full quotas of players by now and took advantage of their opponents mistakes to extend their lead to nine points.

Fergus Mulchrone cut inside, evaded a couple of tackles and was able to pass to Owen who made up for his first half ill-discipline to finish well.

Blaydon began to throw the ball out wide in search of a response and it took the skill of the try scorer Parkinson to make a pair of last ditch tackles to keep their opponents at bay.

EddStobart was left frustrated as a couple of try-scoring opportunities narrowly evaded him by the bounce of the ball as the game opened up with 20 minutes to go.

Frankie Barker was effective in keeping the ball moving, and breaking the gain line with ease at times.

Centre Tom Davenport battered and bruised his opposite numbers in the midfield hitting the defensive line with immense power.

Blaydon cut the deficit to just six points through a Baggett penalty but when Macc stole an opposition line out five metres from their own line, the win was sealed and the home side moved onto a seventh win in eight games and undefeated since the end of November.

Director of Rugby and Head Coach Geoff Wappett said: “Our lads did well today, they defended brilliantly and we won which was the important thing.

“We just have to keep winning and that is what we are doing right now. Seven wins in eight is a great record and teams are losing all over the league.”