Though the conditions were poles apart from those encountered at Barking, the style of rugby and end product was almost identical. 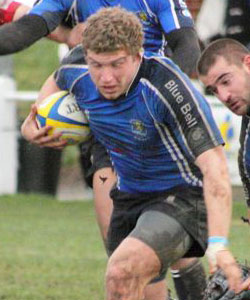 A brilliant performance which saw Blues lead 40-0 at one stage, extends the winning run and keeps up the positivity around the club.

The lads have a become an extremely tight-knit group and it is reflected in their performances on the field, as they are all willing to put in the yards and that extra 10% effort to help each other out and get the results.

The advantage of having a small squad like ours is of course that players get used to playing together and can anticipate their team-mates actions and reactions with greater ease, which in turn makes for a more cohesive unit.

Cambridge turned up and at times, when we had the ball and their backs were against the wall, they weren’t able to pull together and get out of the trench they were in.

That is true testament to the lads and long may the passion and enthusiasm for donning that blue jersey continue!

With ten games to go in National One, it could not be tighter.

Macc are just eight points off table topping Jersey at the moment, but we can’t get ahead of ourselves.

We just have to keep winning and not looking too far ahead.

The match against Tynedale presents a difficult challenge on all counts for Macc, with the North-East a difficult place to go to play rugby.

That being said, we weren’t expected to beat Ealing and we did, and we showing signs of the form that we had at the start of the season, which in a league that throws up shocks every week, becomes critical.

Just a reminder for the Tynedale game, it is a 2pm kickoff so will be an early start for those Blues fans that will be making the journey to the North-East, which I hope is a lot of you!

Looking around the league then, Rosslyn Park were the highest profile casualties of Saturday’s action, getting beaten at home by next week’s opponents Tynedale, While Blaydon also sparked an upset, beating promoting chasing Fylde

Ealing and Jersey came through tough fixtures against Wharfedale and Ciderford respectively, while at towards the bottom, Sedgley Park beat relegation troubled Birmingham & Solihull and Blackheath overcame Stourbridge.

In the final fixture, Barking were consigned to an 11th straight defeat away at Coventry.

With so many teams inconsistent at that minute and coming unstuck in seemingly winnable games, our string of six straight wins takes on even more importance.

There’s still a long way to go but it sure makes for exciting viewing each week.

Around the ground then, and the seconds won well against Stockport, while the veterans whitewashed local rivals Congleton 40-0.

Saturday also saw the Breast Cancer benefit lunch take place in the clubhouse, and I am sure everyone who attended will agree it was a resounding success!

The hard work put in sure paid off and what a great event all round, as it is a great cause which Blues are proud to support wholeheartedly.

A fantastic day all round then and let us hope the rugby goes just as well on Saturday against Tynedale!