Let me start by first saying how good it was to see President Alan Johnson back at Priory Park on Saturday.

Alan has been a key part of the club for many years and it is fantastic to see him back on the road to recovery after a difficult few months. 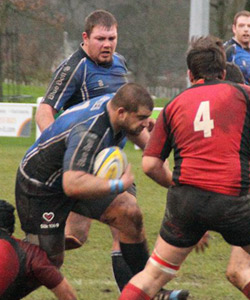 What better for Alan then, than another win, another four points and a great way to start the new year.

Blues once again showed they can win in difficult conditions, and that wind certainly made it difficult for all involved.

A seventh win in eight games means the hard run of five defeats is now but a distant memory.

Things are looking good for Blues now and with players coming back from injury, the run looks set to continue.

It is unfortunate however that we didn’t get through the Christmas break unscathed with both Tom Eaton and Jack Stott-Sugden set for lengthy absences with foot and knee ligament injuries respectively.

Let’s hope they make speedy recoveries and get back to training as soon as possible.

Back to Saturday then, and it was another hard fought display that wasn’t pretty at times from either side, but the weather was always going to dominate given its severity.

Blaydon showed that trying to force the ball out wide at the wrong times can cost you, and it kept Blues in the game at times.

That being said, Blues played some expansive rugby of their own and EddStobart could have had a bag full of tries, save for a couple of unfavourable bounces.

Charlie Mulchrone looked back to his old self and showed what difference having a quality scrum half can do to a side’s play.

Macc will now travel to Barking full of confidence and keen to extend the brilliant winning run. I hope as many of the Blues faithful can come down and show their passionate support as the side looks to push on in National One.

Around the other teams then and the Lions won well at home beating Chester 32-12, while the thirds won 45-10 away at Trafford Metrovick to solidify their position of third in UoS League 1 table.

The fourths won well against Heaton Moor to go second place outright as the sides were level on points at the starts of the day.

What a brilliant start to 2012 for all involved at the club and long may it continue.