So, here we go again. Everyone’s back from their Winter breaks, refreshed and raring to go again. None more so, than head coach and Director of Rugby, Geoff Wappett. Two weeks in the sunshine can do wonders for the outlook and the spirits. So you can imagine him being less than enthused when he was confronted with the weather at the weekend as Macclesfield Blues lined up to face Blaydon, and exact revenge for the defeat earlier in the season. The team was ready to play ball, but unfortunately he weather wasn’t. It was cold, wet and very blustery. Conditions like that don’t make for a game of running expansive rugby. It was more a question of up-the-jumper stuff and trying to grind out a win, particularly as the previously pristine surface at Priory Park was suffering a few problems of its own. Still, the Blues prevailed and secured the win and four points. Macclesfield Rugby caught up with Geoff this week to talk through the game. Geoff, as ever, was on good form and gave us his views about the weather, wonga and winter woes. 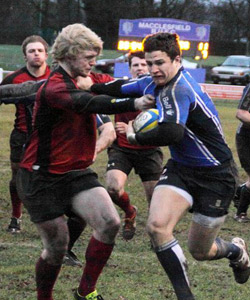 Were you satisfied with performance against Blaydon?

“I’m pretty satisfied with the performance. Blaydon are a tough old nut to crack and we had to work hard for the win. They certainly weren’t going to lie down or make it easy for us. It was helped by the fact that it was a miserable day. We were also coming off the back of a two week break, so we were obviously going to be rusty. It was a cold day with a really strong and blustery wind. So with conditions like that you really need to be on top of your game, and to be fair, we weren’t. Mind you, looking at the results in our league, I think most teams must’ve been affected by the conditions. They weren’t many tries scored: most points came from kicked goals. Still we did what needed to be done and we stuck at it manfully. They’re a good side so we needed to dig deep. They’d already beaten us up there, so we needed to put that right, but it took us the whole eighty minutes to do it.”

So how was the pitch playing given the weather?

“Not as predictably as it normally does. Mind you, I suppose I could’ve made a similar comment after the Sedgley game. The conditions were poor, so scores were lower and tries were fewer. You don’t have to be an expert to recognise that the weather can have a major impact on the course of a game. It affects the pitch and that affects the scoreline. I have to say that’s the softest pitch we’ve played on. Normally at Macclesfield the pitch is good and the surface even and predictable. The ground drains really well, so you know what to expect. But it was wet through and really soft. The biggest problem was the inconsistency: when you crossed the pitch some parts were soft, whilst other parts were a lot firmer. That just made our task more difficult, though you could obviously say the same for Blaydon too.”

So going into the New Year are you satisfied with the position Macclesfield Rugby Club finds itself in, or are there things you’d change if you could?

“I don’t think you can ever say that you’re perfectly satisfied. Certainly as a squad and as a group of players, we’re never satisfied. You only need to come down to training on a Tuesday or Thursday to see that. We’re never going to be satisfied with what we do, and will always be aiming to iron out the problems and try to improve. From a management point of view, Andy and I are constantly on the lookout for players to help us strengthen the team. We’ve got a good squad, but it’s a thin squad also. It’s always going to be difficult when you’re playing at our level and find that you’re not in a position to pay people retainers to play. At the end of the day we can only afford to pay for 20 players to be involved every Saturday. If you’re in the position of some of the bigger and wealthier clubs, you can pay people in addition to the 20 who play. In other words you can effectively pay people not to play. That’s what tends to happen. We pay people to play, so we’re never likely to be able to afford to pay additional players who are good quality but unlikely to play.”

How’s the squad shaping up?

“Our squad’s small and therefore susceptible to injuries and disruption. We just started to get players back fit, then the break comes and you get fresh problems. Tom Eaton broke his toe over the holidays, so he’s out of action. Young Jack Sugden was involved in a motor accident and knocked over, and has sustained bad medial knee ligament damage, so he’s out for some time too. Now we’re still without Chris Jones, though he’s recovering quicker than we expected because of the fantastic work done by the physios. Then we play on Saturday and by the evening Frankie Barker is in A & E having his hand x rayed for what looks like a break. These are injuries you can’t do anything about, but it affects what you’re able to do all the same. So we’re constantly on the look out for new players, but to be honest most of the quality players are already occupied at this time of year.”

Are you confident the Blues can get a win at Barking at the weekend?

“Yes, we’re confident we can get a result. Barking may be a basement side, having only won 4 games out of 18, but they have beaten Ealing and Fylde, so they’re capable of beating good teams. We’ll go there with some degree of confidence but knowing that we’ll have to play well to win none the less. Anything less than a complete performance, and we’ll come away with nothing.”