Macclesfield Prop Tom Mantell has expressed his pride at being selected to represent his country with England Counties next month. 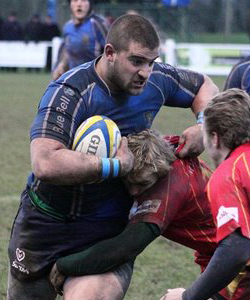 Mantell has had a standout season for Blues this season and will join team-mates Charlie and Fergus Mulchrone in the match against an Ireland clubs XV at Preston Grasshoppers ground Lightfoot Green on March 16th.

“Playing for your country at any level is a great achievement and England Counties is no different,” Mantell said.

“It’s a great way to showcase the depth of talent within the National Leagues and I’m really glad to be part of that.”

Mantell believes the selection of himself and the Mulchrone Brothers is testament to the growth and success of Blues in recent years.

“Its great that over the past few years, Macc have had a number of players included with the squad,” he added.

“it’s a healthy sign of our development as a side.

“Charlie and Fergus [Mulchrone] are good mates and it will be great to play alongside them, especially as they have England Counties experience already.”

The match will be on a Friday night in front of what is hoped to be a packed Grasshoppers ground, but Mantell maintains that his preparation and approach to the game will not alter for the occasion.

“I’m aware of the importance of the game and it’s a fantastic opportunity but I have to take the same confident attitude I would into a game at Priory Park” he said.

Blues Chairman Clive Hammond added, “For the club it is a marvellous tribute to the hard work the players have put in this season to have them selected.

“Its true testimony to the effort they have shown on the field and hopefully we will see several more players selected in the near future.”