It’s seemed like an eternity since we last saw Macclesfield Blues take to the pitch in anger, but in truth it’s only been two weeks. First we had the rest week on the weekend of the first 6 Nations match, and then we had the match that never was down at Rosslyn Park following the icy blast from the east that forced much of the country into lockdown. Anyway, we finally got to see the Blues take to Priory Park once again at the weekend as they took on Midlands side Coventry. Well, we have to say it was worth the wait after all. 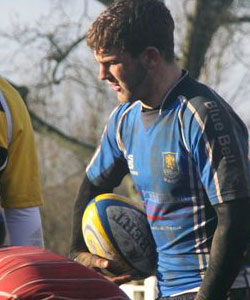 Macclesfield Blues beat Coventry comprehensively, scoring 6 tries in total and securing a valuable try scoring bonus point. The result lifts the Blues into fourth place with a game in hand. Unfortunately Macclesfield Rugby didn’t manage to catch up with Head Coach and Director of Rugby, Geoff Wappett, this week, but we think we can safely assume he was more than pleased with the result. Judging by the press reports we’ve seen, Geoff was beaming like a regular Cheshire cat, and there’s a good reason for that. The game was the first time that Geoff had been able to start Tom Eaton, Jack Moorhouse, Fergus Mulchrone and Ross Winney together for a long time. It’s probably the nicest feeling of all when you’re so spoilt for choice. Eaton came in at fly half, which meant that Winney switched to full back, with Mulchrone at centre and Moorhouse in the wing berth. Boy didn’t it pay dividends. The game was effectively over by half time as Macclesfield racked up 4 tries and 4 conversions which knocked the stuffing out of the Midland’s side. Second half tries by Gavin Woods and Edd Stobart just put the icing on the cake. It was a comfortable and comprehensive victory in the end, and Geoff, Andy and the team should take credit from it.

Next up is the rescheduled fixture down at Rosslyn Park. Is there ever a good time to play a fellow top five team? Well, probably not, but we suppose it’s as good a time as any.  Park come into the game on the back of three straight losses, though they did manage to secure a losing bonus point at Wharfdale. Macclesfield Blues are now 4 points clear of their nearest rivals, but that can easily change in the space of 80 minutes. Still, Macclesfield can go into the contest with confidence after last weekend’s display. When Macclesfield Rugby last spoke to Geoff after the Tynedale game he was relatively confident that the Blues could put up a good show down at Park, and we suspect the victory over Coventry will have only made that conviction stronger. Here Geoff tells us how he thinks the game will pan out:

“Rosslyn Park lost to Cambridge and lost at home to Tynedale. They seem to have come off the rails a bit recently, having played really well up until then. It will be a tough match for sure. It was tight enough when we played them at Priory Park. They scored what turned out to be the winning score in the eighth minute of overtime. We were probably guilty by that time of taking our foot off the gas and thinking we’d done enough, but we paid the price.  They never outplayed us or made us feel any sort of fear. So although they’re a top of the table sort of team, we won’t be travelling with fear. We know we can match them in all departments, and we’d like to try and put the record straight. We’ve lost to them once, and that’s more than enough.”

“Part of our new strategy or at least one of our targets is beat everybody in the league. We don’t want to lose to the same team twice, even though Tynedale have just done that to us. Although it may have happened to us once, we don’t want it happening again. We’re now approaching what I call the big 5 games, with Tynedale being the first.  When we went through our bad patch, Tynedale was the first of our 5 consecutive defeats. Now I’ve told the lads what we have to do is close our minds to that and really concentrate of the next 4 games and, as it were, lay that ghost to rest. It will hopefully turn out to be a testament to how far we’ve progressed since that black time.”