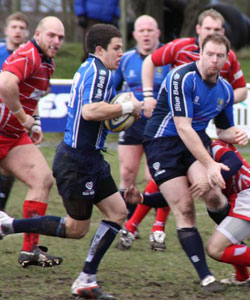 There was a reshuffle in the backs division with Ross Winney moving to full back, Fergus Mulchrone to outside centre and Jack Moorhouse to the wing, with Tom Eaton returning from injury at fly half for his first start of 2012.

“I was very happy with how it went today,” Wappett said

“Having Tom at fly-half gives us plenty of try scoring options so by moving Ross to full-back and Fergus to the centre, we were able to utilise our resources.

“It’s not often this season that i’ve been able to select Charlie, Tom and Ross in the team at once, so that was good.”

Tries from Fergus and Charlie Mulchrone, Iain Taylor and Ryan Parkinson sealed the bonus point after 26 minutes, before Gavin Woods and Edd Stobart completed the rout in the second half.

Winney converted five of his six attempts at goal to cap off a quality all round performance for Blues.

Worries of another postponement because of weather were put to bed after just 40 seconds, Tom Davenport continuing his superb form in the centre to batter through the visitors’ defences before offloading to centre partner Mulchrone to score well.

Blues continued to pile on the pressure and the forwards retained possession ease as they wore the Coventry defence down early on.

Iain Taylor added his side’s second try on the back of a driving maul before Ryan Parkinson added a third with less than 20 minutes gone.

Shortly after Charlie Mulchrone sealed the bonus point, evading the tackler to score well, Winney converting to give his side a 28-0 lead at the break.

Macc continued to build the pressure and could have had another score early on, but for some desperate defending, and a  last gasp knock from winger Josh Fowles.

Blues were made to rue that chance as shortly after Brett Daynes pulled a try back for the visitors, but Elliot Read’s conversion hit the post.

Macc didn’t rest on their laurels though and Gavin Woods put the home side back in the driving seat, touching down on the back of a rolling maul.

The prop was adjudged to have been held up initially, though after consultation from his assistant, referee Marcus Caton awarded the try.

Cov continued to absorb wave after wave of pressure as they raided the replacements bench looking for respite.

Davenport immaculate display was brought to a premature end, picking up a knock and was replaced by Stobart, but his performance didn’t escape the watchful eye of Coach Wappett.

“Tom (Davenport) is a quality player, he gives the opposition plenty of headaches. Wappett added.

“He is a big lad, and is hard to bring down, so when he stays on his feet after contact, that makes the difference between keeping the ball and getting quality fast ball.”

The replacement Stobart then sealed the emphatic victory with a well worked try, Winney unable to keep his perfect record in tact.

Coventry replacement Andy Murray grabbed a late consolation, but the result had been sealed and the damage done.

“We did well today, the conditions were difficult but we used them sensibly.”  Said Wappett.

“We had the wind in the first half, but we didn’t over kick.

“A job is never done when the weather is like that, so our work defensively in the second half impressed me.

“We were keen to make amends for the reverse fixture where we didn’t give the best account of ourselves, and we did that today.”

The win sees Macc move to fourth in National League One after Rosslyn Park’s narrow defeat away to Wharfedale and will face Park away in what is the rearranged fixture from last week.