The threat of a second postponement in as many weeks turned out to be premature as Blues put on another dominant performance at Priory Park.

Another six tries and a fifteenth bonus point of the season means we are now just two points behind second place in National One which is a remarkable effort! 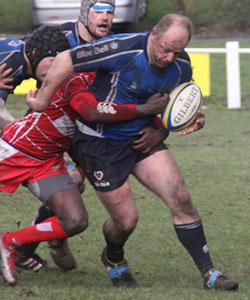 With so many attacking options available and more importantly fit at the same time, it was always going to be interesting how they all fit into the backs division.

Tom Eaton’s return at Fly-half will bring a massive lift to the rest of the campaign as he creates so many try-scoring opportunities.

Ross Winney moving to full-back meant we had his ever-reliable boot at our disposal, and switching regular full-back Fergus Mulchrone to the centre paid dividends after just 40 seconds!

Fergus looked a natural in the midfield and the side showed just how versatile they can be in attack.

It was also great to see the return of the experienced front-rower Martin Kent, who had been out with a broken leg.

Experience like Kent’s is priceless at any point in the season, but when you’re reaching this stage of the season, you need all hands on deck.

Looking ahead then and the next two matches are massive in terms of our season, with trips to Rosslyn Park and Fylde who are fifth and third respectively – back to back.

If we can get results from those games then we have a rare Friday night fixtures against struggling Birmingham and Solihull.

Coming to Priory Park under the lights on a Friday night will create a unique atmosphere and certainly not one to be missed!

Coming out on the positive end of those three results could leave us in a great position before two of the hardest fixtures of the season, hosting Ealing before travelling to table-topping Jersey.

The lads are working as hard as ever and it is fantastic to see that effort translating into results on the field.

What is great to see as well is that they clearly are a tight-knit group and will give 110% for each other, which makes them even harder to beat over 80 minutes.

These boys don’t take any success for granted either so when they do get a win, they don’t get ahead of themselves because there could be a result like the Tynedale one just around the corner.

As is always the case with National One, there were some surprising results on Saturday, most notably Rosslyn Park losing 8-7 to Wharfedale and Ealing losing 12-10 away at Blaydon.

Elsewhere, Jersey once again showed their Championship credentials, winning a narrow encounter 13-11 at Sedgeley Park, which as all Blues fans will know is not an easy place to go and play, while Blackheath condemned Barking to another defeat, winning 29-23.

Elsewhere around the club then and the 2’s were narrowly defeated 23-22 by Preston Grasshoppers, while the thirds had more fortune, running out 44-5 winners away at Stockport.

The thirds have now opened up a 13 point gap in third place and have two game in hand on the sides above them.

Let’s hope then that the weather can keep off for our rescheduled trip to the capital for the crunch game against Rosslyn Park, and let us also make sure that Priory Park is packed to the rafters for our next home game on Friday 9th March against Birmingham &Solihull.