Blues were ahead with less than a quarter of the match to go thanks to tries from Dean Williams and Josh Fowles, but a last gasp penalty from Mike Baxter allowed Park to take the spoils at Priory Lane. 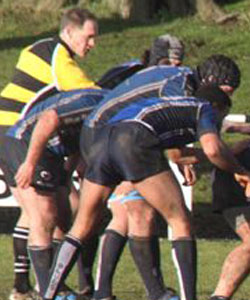 “We didn’t respect the ball today, we couldn’r control our scrum or lineout and we have to credit Rosslyn for that,” said Northey.

“Neither side took a strangle hold on the game, hence why it was so close and why in the end it was decided by a penalty.

“Some of our decision making was particularly poor today, especially from our half-backs.”

The game got off to a frenetic start with both sides looking dangerous with ball in hand, though handling errors from both sides, prevented the game reaching its full potential early on.

The home side had the first real clear cut scoring chance after 10 minutes, but a superb saving tackle from Fowles put paid to any hopes of the deadlock being broken.

It was broken shortly after though with a pair of Will Robinson penalties giving Park a 6-0 lead.

Having withstood some intense pressure, Blues responded perfectly with some possession of their own, culminating in Williams driving over the line to get his side off the mark.

Ross Winney converted the score to put the visitors ahead, and the match remained on knife-edge

Neither side was able to keep the ball consistantly and Blues held onto their slender lead at the break.

After the break, Macc extended their lead through Fowles; the winger showing immense strength to hold off a tackler, avoid the touchline and score well in the corner.

Winney converted a difficult sideline conversion attempt to put his side eight points ahead.

Robinson and Winney exchanged penalties before Charlie Gower’s converted try brought the sides to within a point of eachother.

Park had all the momentum and Blues were giving everything in an effort to keep their slender lead in tact.

With less than five minutes remaining, referee Nick Cockburn sent Williams to the sin-bin for supposedly coming in at the side.

This allowed Park scrumhalf Mike Baxter to slot a routine penalty and steal the lead from Blues.

Despite their best efforts Macc couldnt  regain the lead and had to settle for a losing bonus point.

“Credit to Park, they stuck at it, disrupted the set piece and we didn’t react well to that, “ Northey added.

“The conditions were good and we usually like a solid track, but we didn’t look like it today with the amount of ball we turned over today.

“The lads will have a reaction, they’re just as dissapointed as I am, but we’ll stick to what we do and play our own games, which hopefully will bring an improved performance next week [against Fylde].”