If you’re a Macclesfield Rugby Club supporter and are old enough to remember, then cast your mind back 20 years. What defining event happened in 1992 that arguably changed the fortunes of our Club and set it on the road to where it is now? Well, it was actually Macclesfield’s victory in the Cheshire Cup final. Why was it such a momentous achievement? Well, because it was the first time the Club had ever won the trophy, and because they beat the high and mighty Sale FC that day, which only goes to make the achievement all the more remarkable. Sale, one of the country’s oldest Rugby Union Clubs, were playing in the second tier at the time, in the Courage National 2 League – the equivalent of the Championship these days. They had a very strong and talented squad at the time. They were odds on favourites to win, so much so that they didn’t feel the need to field their full strength first 15 to achieve this. They were expected to win easily. 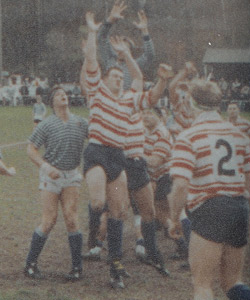 Macclesfield, on the other hand, were plying their trade in the North West 1 Courage League, 4 divisions below. Still, something happened that day in Wilmslow; something that changed the fortunes of this Club.  Macclesfield, captained by Matt Harding and coached by Clive Kershaw, Graham Waters and Gary Brightwell, found their confidence, and ran out 21 – 4 winners and lifted the trophy. If you were lucky enough to have been amongst the 3,500 supporters that day, it’s probably an experience you’ll never forget. For those that weren’t, well, we’re pleased to say that the Club intends to honour and recognise this remarkable achievement by staging a 20th anniversary commemorative match on Friday 9 March at Priory Park. Macclesfield Rugby was fortunate to catch up with one of the players who represented the Club that special day, centre Dave Cummings, and chat to him about his memories of the day and what the victory meant to him and the Club in general.

What sort of challenge were you facing that day?

“Sale had a team with some top class players as you’d expect, but didn’t actually play the full first 15. They certainly had a number of regular first team players representing the Club on the day, supplemented by some second 15 players. Macclesfield obviously were very much the underdogs, and most people expected a Sale to win handsomely, having dominated the Cheshire Cup for a long time. I suppose you say it was a sort of David and Goliath venture for Macclesfield really. Macclesfield were at that time a side still gaining confidence, and we were pitted against a side that was expected to win comfortably.  They went down in points early on in the game, but battled all the way to the end, and that just made the match wonderfully exciting.”

What are your memories of the match?

“I played the whole game and can still remember it well. There was a massive crowd down at Wilmslow, I think around 3,500. I can’t really underestimate what an amazing event it was for Macclesfield Rugby Club. It was a huge game, and a culmination of a very successful season. We’d played well all season, and the league title went down to the very last game the following week against Manchester. Unfortunately we couldn’t quite pull it off, and Manchester won that game narrowly.”

“But the victory over Sale FC was a pivotal moment for the club and acted as a real catalyst. You could almost say that the victory laid the groundwork for where the Club is at now.  We continued our run of form the following season and won the league and were promoted. In fact I think we went through the whole of the 1992/93 season unbeaten in both league and cup games. We won every single match we played and won the Cheshire Cup again that season too. It became a golden era for the Club and arguably influenced what they have been able to achieve since. Granted it’s taken a while to work through, but they’ve progressed through the leagues and have been able to consolidate this position and now sit well placed in National League 1.”

Are you looking forward to the anniversary game?

“It’s going to be a special game at Priory Park on March 9. We want to celebrate this milestone, and hope to get as many people down to the Club as we can.  It’s an evening kick off and it’s actually Macclesfield Blues first league fixture under floodlights. They’re playing against Birmingham Solihull. Stockbrokers Charles Stanley, the company I work for, is sponsoring the game. What we’re hoping to do is to get together as many of the squad players from that remarkable Cup win down to the ground on the Friday night, and we hope all our supporters will come and join us.”