A second half capitulation against Fylde saw Macclesfield Blues squander a strong position to slip to back to back defeats for the first time since November.

Having lead 23-10 five minutes into the second half but 38 unanswered points from Fylde saw the game end 48-23 to consign Blues to a third defeat in four matches. 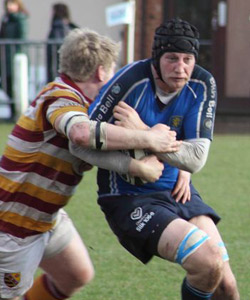 Fylde wing Oli Brennand, who contributed a second half hat-trick in the match was given high praise by Blues director of rugby Geoff Wappett, hailing him ‘the best winger in the league’.

Wappett added: “He’s a marvellous talent, you can talk about the Phil Chesters [Ealing] of this league but week in, week out he is the most consistent.

“We didn’t play particularly bad to deserve that scoreline, we were just a bit generous with the ball late on and you can’t do that against a team like Fylde.”

Pitting the best two sides in the North-West outside the premiership, the match was hotly anticipated, and it didn’t disappoint early on.

Blues were camped on the Fylde line for most of the first 10 minutes of the match, but the home side’s creaking defence held firm.

Fylde broke the deadlock against the run of play, driving over in the corner, which in turn sparked a brilliant response from Blues.

Ross Winney was pulling the strings from fly half, and his wide pass out to the left allowed Josh Fowles to level the match.

Macc were straight back on the offensive and a penalty advantage allowed Winney to slot an opportune drop-goal to give his side the lead.

Winney added a penalty before Jack Moorhouse scored the first of two tries, capping off a good wide move to finish in the corner.

Winney couldn’t convert, but the lead was stretched to 11 points and Macc looked good value for it indeed.

Despite their dominance, Blues were made to work hard defensively at times with both Edd Stobart and full-back Matt O’Regan making last ditch tackles to prevent their opponents scoring.

The home side finally did get a second try, another driving maul finding its way over the line to leave the match delicately poised 16-10 at half time.

Blues got off the perfect start after the break, Moorhouse completing his double by collecting the ball after a scything run from centre partner Tom Davenport before touching down to the right of the posts.

The conversion was added and Blues seemed very much in the box seat.

Fylde began to apply the pressure as they looked for a way back into the match, and Brennand provided it with a quickfire brace to pull his side to within a point.

Fylde then took the lead with Moorhouse falling foul to an unfortunate misjudgement, a routine box kick bouncing awkwardly over his head straight into the hands of Johnny Roddam who surged down the wing to score.

Fowles could have had a second score with 10 minutes left, the winger having an open route down the line to score, only for Fylde captain Sam Beaumont to make a saving tap tackle.

The skipper’s heroics gave his side a massive lift and sparked what can only be described as a massacre.

Blues were looking desperately for a score to get them back in the match but forced the issue too much and conceded two tries in three minutes to put the result beyond doubt.

With a consolation try bonus point the target, Macc were just metres away from their opponent’s line, when Winney’s expansive pass was intercepted and returned the length of the field to cap off a devastating second half for Blues.

“Despite what the scoreline suggests, we really could have won that game,” Wappett said.

“The most disappointing thing is to come away with nothing having dominated for large periods of the match.

“We’ll keep soldiering on and won’t let our season slip away; there are still 30 points to play for.”