Under the Friday night lights, and in front of one of the biggest crowds we have seen at Priory Park all season, the stage was set for a cracking match to kick off a bumper weekend of rugby. 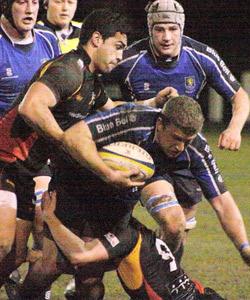 While for the neutral, the game had everything; controversy, some great tries and some exceptional kicking, for the loyal Blues faithful it was another disappointing performance and a third defeat on the bounce.

Credit to Birmingham, they are fighting for their league survival and four wins in a row now has kept their mission impossible in with a shot of coming through.

They are still one of the favourites for relegation, but have made some shrewd signings that are coming together for them just at the right time.

Once again though for Blues, there were too many turnovers and too many silly mistakes to realistically stamp any kind of authority on a game.

It is very easy to make excuses about injuries and such but when you have a very small squad as we clearly do, the absence of a few key players really does disrupt the shape of a side that when at full strength, is as good as any in this league with no exceptions.

Coach Wappett talked about playing for pride after the game on Friday and we can be sure that is what any player that dons the Blues’ shirt and forms part of that match day squad will do.

The players will never give up playing for this team, and we as supporters must match that by not giving up on supporting them through thick and thin, the way they do for each other.

There is still plenty to play for in this league with five matches to go, and the key will be how we react as a club both on and off the field to this unfortunate run of results.

If we think back a few months to that poor run of form where we were being written off by everyone left, right and centre but responded in the fixture against Blackheath and then that marvellous result against Ealing.

Memories of that collective elation and relief when the final whistle blew against Blackheath will surely have stuck with all those in attendance at Priory Park that day, as I can assure you it has with me.

It is moments like that which we will need to draw on in this tough run in towards the end of the season.

We will head to Blackheath refreshed, recharged and refocused and that will hopefully provide the impetus for a much needed win.

Around Priory Park then and the seconds won 28-7 against Chester while the thirds came through 48-17 against Sanbach.

The Vets had their brilliant cup run brought to a halt by Port Sunlight, losing 27-7, with the fourths rounding off the fixtures with an incredible 99-7 win over Crewe!

Commiserations to our valiant Vets and congratulations to our other senior teams who as always fly the flag for Macc Rugby!

Around National One then and there were massive upsets, none more than league leaders Jersey who lost 22-20 to bottom club Barking, conceding in the last minute of the match to end an incredible 18 match winning streak that stretches back to the start of October last year!

Elsewhere Ealing survived a shock of their own to keep their promotion hopes alive, scoring an unbelievable five tries in the last eight minutes to beat Cambridge, while Coventry put a dent in Fylde’s title challenge, winning 37-26 at Butt’s Park.

In the remaining fixtures, Blaydon overcame the in-form Cinderford 31-24, Rosslyn Park edged Stourbridge 25-22 to send the midlands side closer to their relegation fate, while Blackheath put six tries past Tynedale (34-17) and Sedgley Park edged Wharfedale 22=19 in the Roses derby.

So with that let’s all enjoy St. Patrick’s Day and the culmination of the Six Nations, before getting back to business in the capital against Club!