Perfect conditions for a high-scoring, free-flowing display of rugby awaited the sides in London yesterday and at times both sides 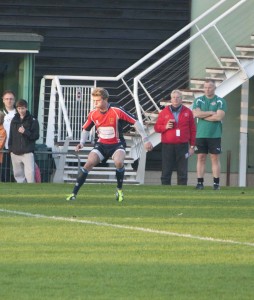 The difference was though, that Blackheath were like it more often than we were which was key.

Having to play almost a quarter of the match with 13 players didn’t help but showed just well we defended to keep the game as close as it was.

The frustration is that we know how well we play in those conditions, but perhaps didn’t have the legs to compete for 80 minutes in unusually hot conditions.

It has been a long, gruelling season for the lads with many players playing a hell of a lot of rugby, so it can’t be easy at this stage of the season to be playing in the heat against an impressively quick side.

There were definitely some positives to be taken back to Priory Park and they came in the form of Edd Stobart and Matt O’Regan.

Of course when someone score two tries in a game, you’re going to be seen as having a good game, but Stobart provided much more than that on Saturday.

He was sharp, quick and dynamic and looked dangerous every time he had the ball in hand.

Stobart was equally as effective defensively with a number of saving tackles being put in to keep the dangerous Blackheath players at bay.

O’Regan was impressive coming off the bench and provided an added impetus to the side with his physical strength and searing pace.

Matt is a brilliant talent and looked hungry and enthusiastic which made his stock rise in the eyes of those in attendance.

It is great to have players like this in the side as they play as hard coming off the bench as they do starting, and will play where they are needed to just because they are playing, a fantastic attitude to have.

Looking at the match as a whole then, and Blues had some good moments, but ultimately they weren’t good enough in key areas such as the set-piece where the lineout and scrum were getting unusually bullied by the Blackheath pack.

We welcome Ealing to Priory Park next and they are a side very much in resurgence with just four fixtures remaining.

You will remember that having ended a run of defeats the week before, Blues went down to the Trailfinders ground and became the first side to beat them at home this season, though the match will be remembered more for the horrific leg break to Chris Jones which delayed the match by almost an hour.

Let’s hope for an equally entertaining game without any injuries to report on!

Around Priory Park then and the second team won 53-14 against Caldy and the thirds had scrum half Bryan Graham to thank as his first half hat-trick to thank for a 44-30 win away to Preston Grasshoppers.

The fourths beat Buxton 2’s 48-3 but the Veterans were second best against Leek, losing 57-15 at home.

Commiserations to the veterans, but some fantastic results from our adult sides!

There is also congratulations to some of our Under-15s who represented Cheshire against Staffordshire and Lancashire and achieved a 19 all draw and a 41-17 win respectively.

So well done to Christian Taylor, Ben Hadfield, Archie Thorneycroft and Ben Bianchi, as well as Joe Hale and Kyle Jones, which is fantastic to see for the future of the club!

One last thing then, and in this age of social media, can I point you towards our Facebook and Twitter pages, which aim to give you additional information to that you receive on our fantastic website.

The number of ‘followers’ we have on our twitter has increased almost ten-fold since the start of the season, and allows fans unable to travel to games home or away with vital updates to keep in touch with the mighty Blues.

So if you’re on twitter, give @MaccRUFC a follow, or if you prefer facebook, search ‘Macclesfield Rugby Union FC’, both of which will give your weekly fix of Blues news.

So with Ealing approaching, let’s hope we can grab a victory to get the run-in back on track.