The first home game under floodlights at Priory Park was supposed to be a night to remember. In many ways it probably was for the team and the supporters save for the small matter of getting beaten by the visiting team Birmingham Solihull. It certainly wasn’t written in the script; league form and position alone suggested that Macclesfield Rugby Club should have expected at least a relatively comfortable 4 point home victory. Unfortunately, our visitors had other ideas. They responded well, and showed the type of team spirit that will be necessary if they wish to remain in National League One. They may have rained on the Blues parade, but if the truth be told, they probably were worthy of their 4 points. So, what do Macclesfield do now? Do they go back to the drawing board and come up with new game strategies, or do they stick to the tried and tested formulas that have generally served them well during the course of the season? Well, Head Coach and Director of Rugby, Geoff Wappett isn’t convinced it’s necessary to rip up the blue prints. He’d much rather the players took a long hard look at how they played and ask themselves the difficult questions. What he wants is honesty. Here Geoff talks to Macclesfield Rugby about Friday’s disappointment and where the team goes from here.

Just how disappointing was the loss to Birmingham Solihull? 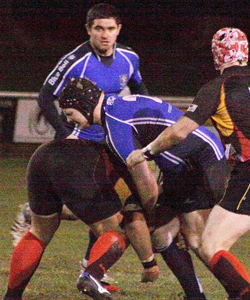 “Naturally I’m bitterly disappointed with the result, in fact, I was sick with disappointment straight after the game. It shouldn’t have happened, but that’s the problem with all forms of sport – the outcome is never predictable. Look at the fixtures last weekend for example. Barking, the bottom team in the league beat Jersey the league leaders who hadn’t lost for 20 games. Who’d have thought that lowly Coventry would turn over Fylde? Strange and unpredictable things happen in sport continually. Never the less, we have to accept that we didn’t perform as we should’ve done. Before the game you would be telling yourself that this was the type of game where we should be looking to come away with 5 points: having said that, we certainly didn’t go into the game overconfident. The problem was we just never seemed to get going. We were nervous and inconsistent, and worst of all kept turning the ball over.”

“Basically errors cost us the game, and we’re less than pleased with ourselves. I take nothing away from Birmingham Solihull either: they were good value for the win. They are desperate to stay in this league, and that showed in the way they played. They worked hard as a team as pressed us every time we had the ball. They were sharp and particularly effective with the boot. But, as a team we should’ve been up to the task. If there’s a positive to take from the game is that we still have the ability to not just score, but score very good tries. At any other time, a team scoring 4 good tries would normally expect to win the game. But scoring isn’t everything as we’ve found at times this season, and if your overall performance is inconsistent and strewn with basic errors, then you just won’t win those marginal games. The inconsistency didn’t stop with us though. I thought the referee was also inconsistent, and we paid the penalty for that. “

What do you think was the principle difference between the two teams?

“I suppose you could say it was probably discipline. You can’t afford to be undisciplined, particularly when you’re facing as good a kicker as Mark Woodrow. In my opinion he’s one of the best and most consistent kickers in National League rugby. If you give him a free shot, he’ll make you pay. His 19 points was probably the biggest difference between the two sides. “

“Still, I‘m struggling to understand why we just didn’t turn up on Friday night. It’s strange really, because I believed that playing on a Friday night would suit us. Apart from the result, the night game experiment was a resounding success. Lots of people came to see the game, and lots of people hung around the Clubhouse afterwards, so in that respect it was a tremendous success. I suppose it almost doubled the disappointment because we couldn’t reward the crowd for their loyalty and commitment. Maybe it was always going to be a tough ask as the players had been at work all day and had to rush to the game straight after they’d finished. It might sound a strange thing to say, but in some ways maybe Birmingham Solihull had the slight advantage in having to travel. Many of their players had probably had to take an afternoon off work, assuming they all met up at Hollings Hall at say 4 o’clock. So, maybe they were just that little bit fresher than us. Still, there’s no point looking for excuses: that’s just not our way. We lost, and now we have to move on and plan for the next game.”

So, what happens between now and the Blackheath game?

“I still feel sick at the result and particularly disappointed, but we now have to look ahead. We’ll study the DVD over the course of the next week or so, and see if we can identify the areas we need to work on. I like to call it an ‘honesty session’: it gives the players the chance to look at the evidence and figure out where they’ve gone wrong and how they can rectify that. Some of our play was good, but at times some of our play was just sloppy. What we need to do is concentrate on the good stuff and eliminate the poor stuff. We’ve got a week off now, so we need to use this time constructively. We need to remember that we’ve got 5 hard games between now and the end of the season, and we have to try our best to win them all. It won’t be easy by any means: our next game’s away at Blackheath and they’re level on points with us, so that will be tough.  But I still believe we’ve got what it takes to win these games. Our focus needs to be on improving with every game and keeping going right to the last whistle of the last game.”