For any neutral, last weekend’s game at Priory Park was a belter. It was a treat for the home fans too, though the last 13 minutes were certainly nervy and nail-biting. Still, in spite of some inconsistency, the Blues have shown a steely determination and a willingness to chase a result all season, so it won’t have surprised too many when Ross Winney slotted over that final penalty to level the scores. What might have surprised them is that he didn’t go for the corner and try to get the full seven points from the final play. Well, there’s a reason for that – Head Coach and Director of Rugby, Geoff Wappett. Geoff called the play and insisted his side went for the penalty to secure three points, rather than risk open play and come away with just the one. Points don’t always translate into prizes, but they’re satisfying none the less. Both teams therefore came out of the game with a ‘result’, though it probably in all fairness wasn’t the result that Ealing would’ve ideally preferred. In this week’s article, Geoff talks to Macclesfield Rugby about problems, pragmatism and promotion. 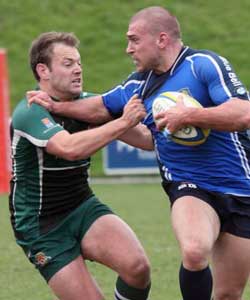 Considering it was such a cracking match, do you feel pleased or disappointed not to have picked up the full five points?

“Well I guess it was the type of match any neutral would’ve loved to watch. It had it all: good defence, attacking threat and tries galore. All in all it was exactly the type of response I’d hoped the boys would deliver. Could we have won the game and got the five points? Well, Yes I suppose we could, but then again so could Ealing. It was nip and tuck all the way. Up to sixty minutes we were playing really well and were leading 31-17. Then we switched off for 10 minutes for some reason, ad Ealing upped their game. With 10 minutes left we were trailing by three points. When we were awarded that final penalty I got the message on to take the points. Sometimes you have to be pragmatic. As far as I’m concerned 3 points is better than one. Who wants to be gracious in defeat? I think a draw was probably a pretty accurate reflection of how the game went.”

What stood out for you from that performance?

“What particularly pleased me was the way we dealt with problems and adversity. One of the squad cricked his back in the warm up so had to be withdrawn from the starting 15. Then Sam Moss popped a calf muscle early on, so we had to readjust when Dave Blackwell came on for his debut. We let Ealing in for an easy early try too. Perhaps they caught us cold. Then to put the tin lid on it, Tom Eaton got binned. For what, I couldn’t tell you. We seemed to have a problem with the referee all through the game. He took exception to something in our front row, and once he’d got that bee in his bonnet, he wouldn’t let it drop. Fortunately the penalties and free kicks didn’t cost as much as they might have on another day.”

“But in spite of these four unplanned events, we still managed to battle through and raise our game. In fact, that’s something I’ve noticed about the lads, and it’s something we’ve spoken about before. They always seem to be capable of raising their game when we play against the top teams. We’ve done that against Ealing before, and we did well against Fylde. Let’s hope it continues when we go to Jersey.”

What about the attacking threat the team showed?

“I thought we looked really dangerous in attack, and Charlie Mulchrone and Edd Stobart were fantastic. If there’s a gap to be seen, then Charlie will always be the first to spot it. Edd is coming into his own at the moment, and seems to be relishing playing on the harder grounds. It’s almost like he’s picked up an extra yard of pace, and that will cause problems for even the best defences. He’s had two storming performances recently, so let’s hope he can carry this momentum forward to next weekend when we make the trip down to Jersey.”

Does the loss of two points damage Ealing’s prospects of promotion?

“Well, let’s say it won’t have done it any good. I think they’re six points short of Jersey now, and the league leaders don’t look like slipping up. If you had to put your money on any side, then it would have to be Jersey. But, they still have to play us yet, and we’re certainly capable of putting a spanner in the works. Whether the game against us will be the defining one is anybody’s guess, but what we can guarantee is that we’ll go down there and fight for every point. “

Are you looking forward to the trip down to Jersey?

“It will be an interesting trip. I’ve been to the ground before and know how good it is.  As far as I’m aware none of the boys have been; well, certainly not as a team any way. What will probably come as a bit of a surprise is the size of the crowd. Jersey get a full house each home game, so our boys will have to quickly get used to playing in front of thousands. I’m hoping this will spur them on even more. It will be tough to come away with any sort of result, but we’ll do our best. Besides, it promises to be a great trip. The lads have never flown to a game before. They’ll also stay on for the night after the match and return the following day. Fortunately we haven’t got any prima donnas like Henson at Macclesfield, so they’ll enjoy themselves hopefully, but I’m confident they’ll be mindful of the name and reputation of the Club. So, all in all it should prove to be a memorable weekend, especially if we manage to turn them over.”