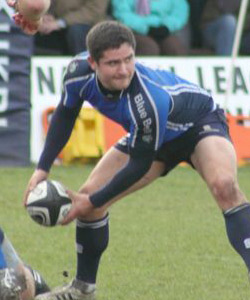 annihilation at the hands of league leaders Jersey.

Despite having a player sent to the sin-bin, the home side were impeccable in defence and took advantage of every mistake made by Blues.

Director of Rugby and Head Coach Geoff Wappett said: “It was a bitterly disappointing performance in the end.

“We had the lion share of the game especially in the first half, and the momentum started to go our way but some poor decisions at key times really cost us today.

“We worked very hard to win the ball, but when we had it, our management was poor and it cost us dearly.”

In greasy conditions, in front of a partisan crowd of over two thousand, Blues looked incredibly sharp and were the better side for much of the first half despite conceding the first score of the match.

There was almost an immediate response by Blues as Franky Barker won an attacking lineout in Jersey’s 22 and popped a pass to Charlie Mulchrone who darted through a gap but was denied by the tenacious Islanders defence.

Blues seemed to have a case of white-line fever as they continued to pressure the home side, only for handling errors to nip the progress in the bud.

A penalty from Ross Broadfoot left the match delicately poised at the break, as Wappett’s side knew they needed a fast start to the second half.

With the early running in the second half going all Blues’ way, and Jersey down to 14 men, the visitors sensed an opportunity, but two missed penalties from full-back Ross Winney, took the wind out of their sails and gave the home side a massive boost.

To add insult to injury, Jersey then scored against the run of play, Donavon Sanders breaking the line to surge down much of the field before offloading to man of the match Guy Thompson for the first of three tries for the flanker.

The game was put to bed shortly after, Thompson intercepting a loose pass to finish an easy score before hacking the ball up the field to complete his hat trick moments later.

Having been put to the sword and running on empty, Blues conceded two further tries to round off a frustrating performance and seal a first whitewash in Wappett’s tenure as Head Coach.

The result also seals a fifth defeat in six outings which with two fixtures to go, has put a sour turn to a topsy-turvy season.

Wappett added: “They created a lot of pressure with their line speed and that is an integral part of their game, and we just didn’t respond well to it.

“The harder we forced the issue the more mistakes we made and we were punished.

“We should have played the pressure ball in their half the way we did in the first half but we didn’t and too many poor decisions were made.

“I’m looking for a massive response from the lads, the whole gambit needs to be upped massively and we have to put this behind us and spur ourselves on for Cinderford next week.”