Having lost so disappointingly to Jersey last week, it was important to put it behind us and not dwell on the result. 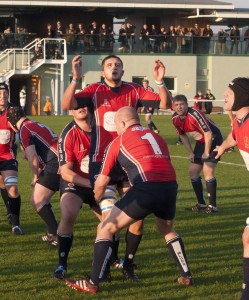 For 40 minutes against Cinderford, the match had a feel about it that has become all too familiar at times this season, but an inspired second half produced one of the best games we have seen at Priory Park this season.

24 unanswered points is a real testament to the resolve of these players and show that even though it has been a long season, they are still up for a fight.

It was always going to be interesting to see how the side responded to such a heavy defeat, especially with key players like Ross Winney and Jack Moorhouse missing for the match.

Tom Eaton took the armband and looked a reformed man after a disappointing performance last week.

Despite a mixed time of it off the tee, his territory kicking and game management was superb today and was ably supported by Charlie Mulchrone at scrum half.

Dean Williams also impressed breaking the line with regularity while providing and impetus and force in the engine room.

It was great to see Richard Hughes back in the midfield as he has been a loyal servant to the side, while Matt O’Regan looked very comfortable at full-back, and will be interesting to see if he can stake a claim for it on a regular basis going into next season.

The biggest lesson learned was that the mistakes they made in the first half were not repeated after the break, which in turn produced a much improved display.

Let’s hope that confidence can be transferred to next Saturday and another five points against Wharfedale.

Blues won the reverse fixture on the opening day of the season 31-12 with a hat-trick from the young Mulchrone and a near faultless kicking display from Ross Winney.

We had less success the last time we travelled to Yorkshire to face them, as we went down 43-24 in October of last season.

Let’s hope we get a different result and sneak into fifth position in the league, which is where we will finish with a win and a Rosslyn Park defeat, who face a difficult trip across London to face Blackheath, I think it’s fair to say I speak for everyone when I say ‘Come on Club’.

Around Priory Park then and it has been a good week for Macclesfield’s teams, none more so than our fourth team, who were crowned division five south champions with a 32-18 win away at Lymm.

Congratulations to all involved and enjoy the celebrations!

Elsewhere the second team edged out our local rivals Sedgley 42-39 which is never a bad thing, and have secured second place behind Preston Grasshoppers in the Conference A.

The thirds lost their first league game at home this season, as they went down 26-10 to Birkenhead Park; the defeat ending the side’s hopes of promotion this season, but a final league position of third is fantastic reward for a gruelling season.

Once again well done to all our teams and enjoy the summer months of rest before donning the royal blue again next season!

Around National League One then and Jersey were finally confirmed as league champions after a 37-13 win away to Stourbridge. Congratulations must be extended to all involved and the very best of luck in their Championship endeavours next season.

In the chasing pack, Fylde and Ealing couldn’t be separated as they drew 22 apiece, which amazingly is Trailfinders’ third draw of the season including the match against us three weeks ago and a stalemate with Blackheath in December.

Blackheath piled on the woe with a 38-27 win over Birmingham and Solihull while Rosslyn Park were put to the sword against Blaydon.

Towards the bottom end of the league and Sedgley just had enough to beat relegated Barking 30-26, while Tynedale beat Wharfedale 23-20 in the North-East.

In the final fixture of the weekend, Cambridge put six tries on Stourbridge to add a positive note to a difficult season for them.

With just the one fixture left, Promotion and relegation has been decided but there are still bragging rights at stake for the rest of the sides involved.

Let’s look to end the season on a high, before pencilling in our Saturday trips next season.