With the possibility of fifth place up for grabs for Blues, there was plenty to play for, but the match certainly had an end of season feel 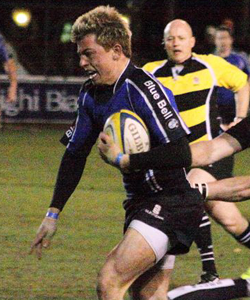 That was about the only thing you could feel though as it was bitterly cold in North Yorkshire, and with a driving wind, the match never really sparked into life.

A disappointing defeat then and an unfortunate way to end a topsy-turvy season for Blues as two sublime runs of form, interspersed by two very poor runs of defeats, has made for a sixth place finish; two worse off than last year, but as Head coach Geoff Wappett said, it is never easy in this league and it is getting harder.

There is a real feeling of optimism that Blues can challenge next season and there has been evidence to show it at times this season.

That collective belief needs to be echoed in the continued support from the Blues faithful, who have been fantastic this season.

If the dreams of promotion are to become a reality, everyone must rally round each other in order to get over that line.

September though is a long way away and there are more immediate matters to be noted.

Firstly next Saturday (5th May) will see two of Macc’s team challenging for silverware in the form of the Raging Bull Plate finals.

The Lions, who finished third in their league, face Sedgley Park at Stockport, while the fourths, who won their league, Tyldesley at the same ground.

Fantastic efforts from both sides and just more reason to be proud to be Blue!

Priory Park will play host to the Bill Beaumont cup fixture between Cheshire and Yorkshire on the same day with a number of Blues regulars in the squad for Cheshire.

Let’s hope for a big win over our northern rivals and hopefully a trip to Twickenham for the final.

The fun doesn’t stop there with the second annual ‘Boobs vs Balls’ charity match set to take place on the 12th May.

Last year’s event raised over £1500 and everyone is hoping this time round we can raise even more.

So get down to the ground to watch the battle of the sexes and show your support for some fantastic causes.

In the final round of fixtures in National League One then, champions elect Jersey beat Fylde 23-8 while Blackheath rounded off the season well by beating London rivals Rosslyn Park 24-10.

Blaydon put the final nail in Barking’s coffin with a 56-7 win in the north-east, while Cinderford bounced back from defeat at Priory Park to thump Coventry 44-0.

In the final game in National One Sedgley Park narrowly beat Cambridge 41-36 at home to round off the season.

So after 30 games, Jersey have finished top of the pile with Birmingham & Solihull, Stourbridge and Barking getting relegated.

Joining Blues in National One are promoted champions Loughborough Students and Old Albanians from National Two North and South respectively, and will be joined by either Richmond or Caldy who face off next weekend.

Esher will make up the teams in the league as they were relegated from the Championship.

So next season is already shaping up to be an exciting one!

As some of you may know, Wharfedale was my last game working for Macclesfield bringing to end a fantastic and memorable season personally.

I would like to thank everyone for the support I have received from the club and its patrons.

It has been a brilliant season and a privilege to work for such a wonderful club, and it desperately disappointing that I am unable to continue in my role as press officer.

When I arrived in September I had never had any dealings with the club, but as I leave seven months later, I will always have an affinity with the club, and hope Blues achieve the success they deserve.

A few of you may have met my successor Mark Risley, and for those who haven’t, you have in him an enthusiastic and committed journalist that will no doubt continue the work I have done this season and be just as successful in doing so, and I am sure he will be welcomed just as warmly as I have been.

So as the curtain falls on another season for Blues and with it my time with the club comes to an end, remember you are all part of a fantastic club and for that you should be proud

So for the last time, come on Macc!